Best Electric Vans We take a look at the best electric vans that are currently on our radar, coming in a range of different shapes and sizes.

Why buy an electric van?

Electric vehicles are very much part of our future. With cars the distinct main focus, other vehicles are starting to see electric versions become available too. This includes vans, the workhorses of everyday life, that deliver our goods, carry our tools and come in handy when shifting bulky items, to name just a few uses.

Mainly diesel powered, van manufacturers are now starting to offer some interesting electric versions. Positives of an electric van include:

Below we take a look at some of our current favourites, which are available new, used and coming soon, which include some household names as well as some that may not have been on your radar.

In this section we take a look at the best electric vans to buy brand new right now, which come with many benefits such as full manufacturer warranties along with other advantages.

Kicking off our electric van list strong with the International van of the Year 2021; the Vauxhall Vivaro Electric. With such a prestigious award to its name, you just know the Vivaro Electric is going to be good.

Vauxhall Vivaro Electric offers up to 205 miles of electric range per charge, when opting for the 75kWh battery, or up to 143 miles with the 50kWh battery option. That's a lot more than many current electric vans which can't get beyond 100 miles, let alone 200 miles.

As for charging, 80% capacity can be achieved between 30 and 45 minutes with a 100kw charger. As Vauxhall is part of PSA - the Peugeot e-Expert and Citroën ë-Dispatch are almost identical vans - also winning International Van of the Year. They feature slightly different styling and minor changes in their overall stats.

It's fair to say Renault were ahead of the game in terms of electric vans as the Kangoo Z.E. has been produced since 2011.

As for styling, the Kangoo has been updated since its first appearance a decade ago. Now fresher and smarter, the interior follows suit, but this is still a van so there is no over the top features. The Kangoo is focused on getting the job done.

Over time the practical Kangoo has evolved and is by far one of the best electric vans on offer. Smaller and more compact than the aforementioned Vauxhall, Peugeot and Citroën award winners, the Kangoo Z.E. still offers a decent 640kg payload, and a not too shabby 322kg towing capacity, which considering its size is rather good.

On average, you should see around 124 miles of range in the warmer summer months, whilst in winter you'll see a reduced circa 75 miles of range. Charging will take just 6 hours from flat to full, when using a 7kW wallbox charger. 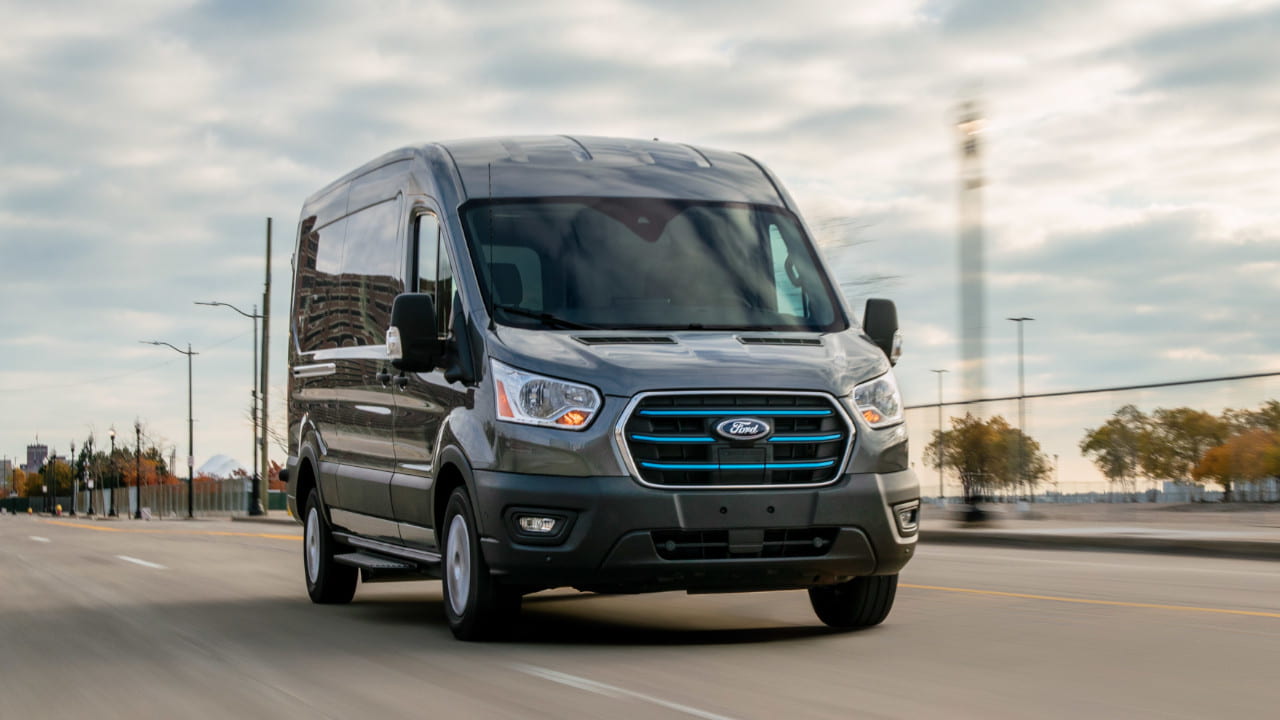 The Ford Transit is arguably the most iconic van in the UK, and the E-Transit sounds like it could be a great bet for those wanting a fine electric van.

Promising a 217 mile range and up to a 1616kg payload, the E-Transit will offer a more than decent package. And as for running costs, it's estimated you could save up to 40% in servicing and cost of ownership compared to a regular Transit or similar.

Ford SYNC 4 is also included, for a cloud-connected communication and entertainment system. Charging will be similar to the norm, with overnight charging solutions, and faster times from a dedicated wallbox or by using a public rapid charging station. 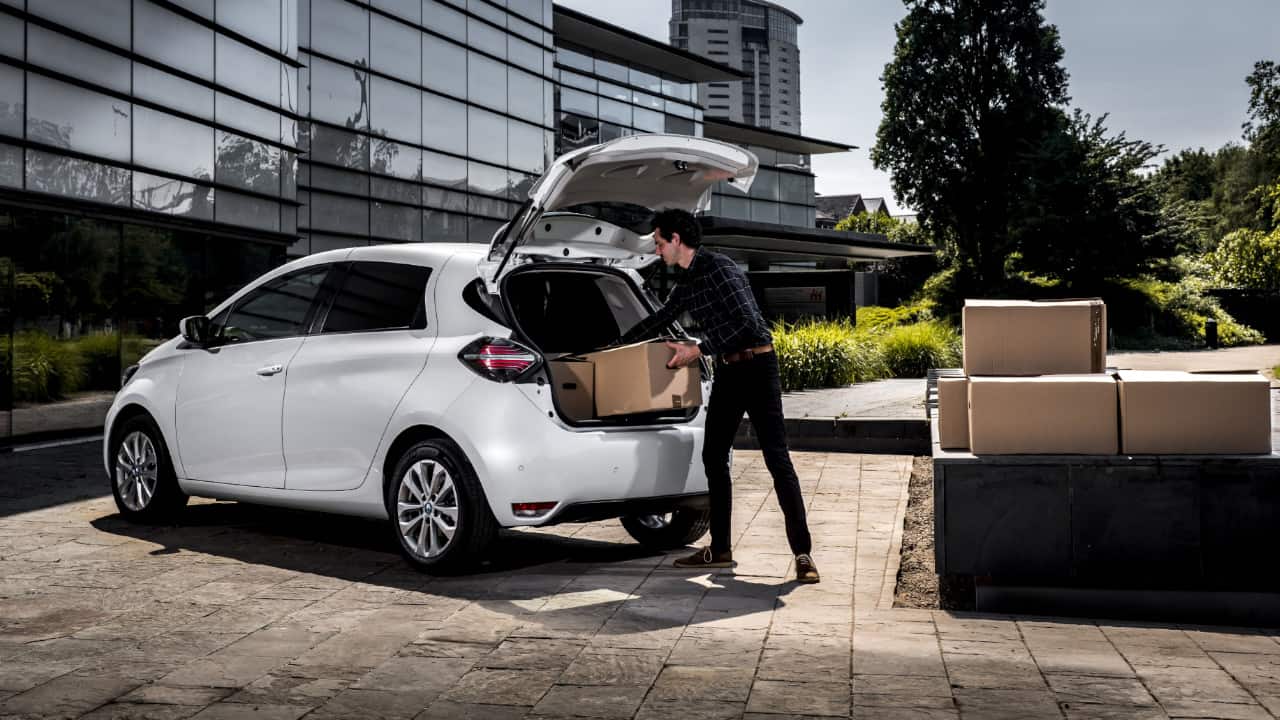 The Renault ZOE Van is actually the first all-electric car-derived van available for the UK market. Featuring the same electric range, tech and interior quality of the ZOE electric car, the van version is a nice transition for those looking for a van that could well be their first van, ideal for a small business.

A payload of up to 387kg is decent, considering the ZOE is the most compact van in our list. This is the only van in our list that doesn't feature any towing capacity, but considering its humble dimensions, it comes as no surprise.

However, for what it lacks in towing capability, it more than makes up for in range, offering the most in this list of electric vans, with up to 245 miles possible.

Like most electric vans, a 7kW charger is a great addition if you want to charge your electric van in a reasonable amount of time. It will take around 9-10 hours with the ZOE, so an overnight charge will suit it perfectly. Public fast chargers reduce this time to around 3 hours. 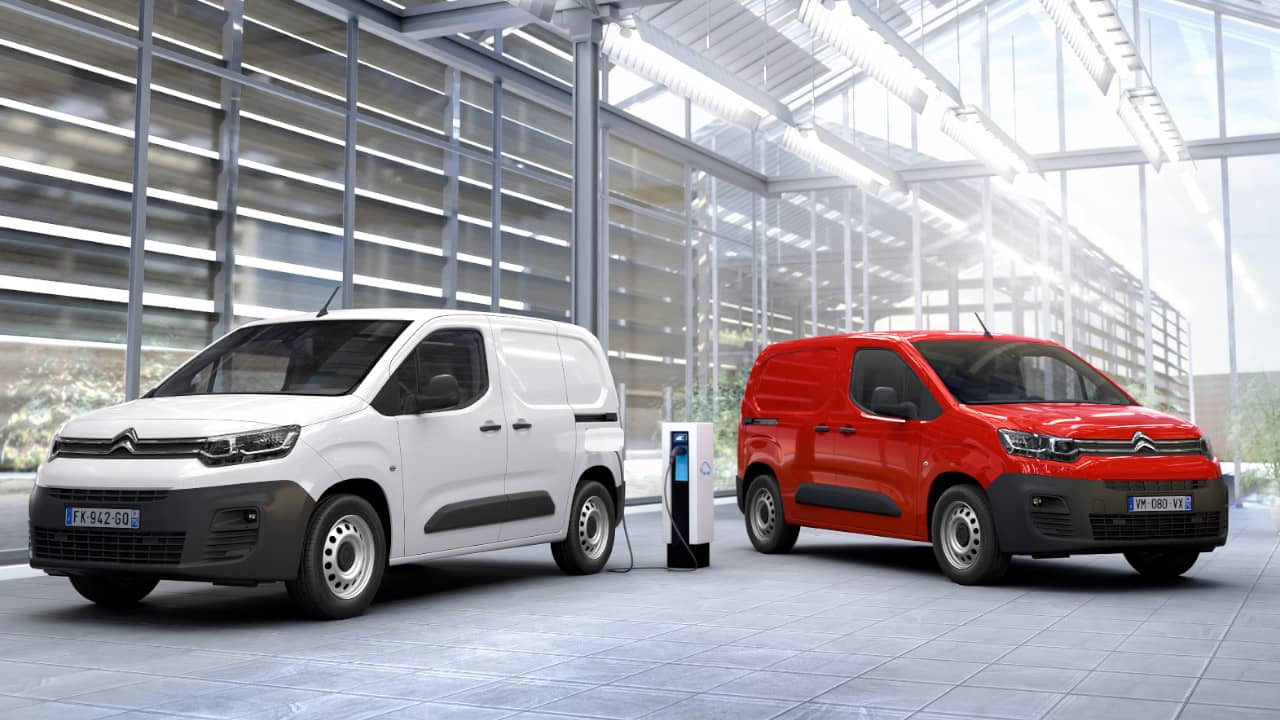 The new Citroën ë-Berlingo Van Electric is, as you've probably guessed from the name, 100 percent electric, producing zero tailpipe emissions. This is good news if you live in or work in the city, as you won't have to pay congestion charges due to the van's green nature.

And the Citroën ë-Berlingo Van Electric doesn't feel the need to shout about its electric nature either, as it looks more or less identical to its regular fuel-powered Citroën Berlingo sibling.

Citroën ë-Berlingo Van Electric offers up to 171 miles of electric range per charge and a decent payload rating up to 800kg. As for charging, 80% capacity can be achieved via a public charger in just 30 minutes.

And finally, as Citroën is part of the Stellantis group, there is also the Peugeot e-Partner and Vauxhall Combo-e which are based on the same underpinnings, and look almost identical, so if you prefer a Peugeot or Vauxhall, there is always that further option too.

In this section, we take a look at the best used vans available to buy right now, which can't be bought brand new, but can be bought with a decent saving. 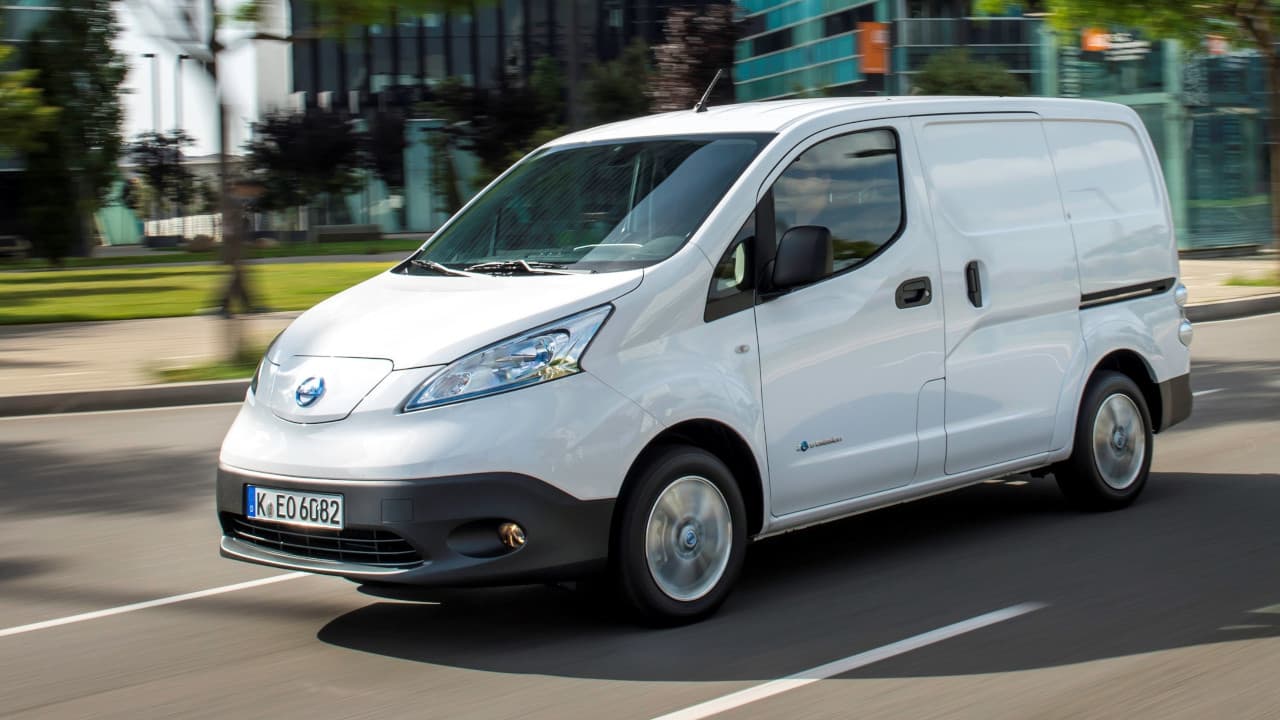 Another decent electric van, the Nissan e-NV200 doesn't stray too far from the regular NV200 vans. Apart from small blue detailing here and there on the exterior and interior, the e-NV200 is subtle in its approach.

What isn't so subtle is its electric ability, with between 124 and 187 miles possible, thanks to a new 40kwh battery. What's more, three different charging modes are available, with an 80% charge possible in 40 to 60 minutes with a rapid charger, or a full charge in seven and a half hours with a wall box. It's also worth taking note that if you wanted to charge via a domestic plug, it would take a lengthy 21 and a half hours. But it's nice to know there will always be an option.

The e-NV200 has a payload of up to 705kg, along with a 410kg towing capacity too. Standard features include ABS, front power windows and Nissan Intelligent Key, whilst the range also features cruise control, reversing camera, air con and navigation.

In this section, we take a look at up-and-coming vans that will be on sale in the future. 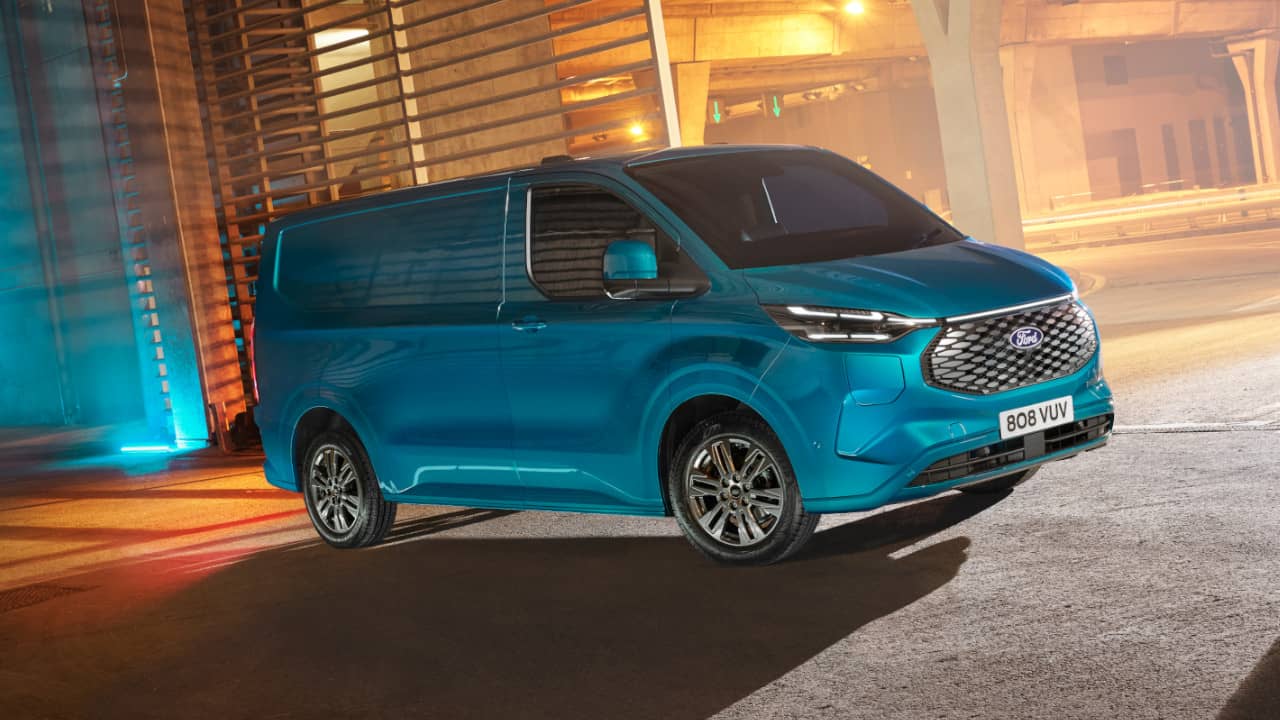 Coming in 2023 is one of Britain's best-selling vans - electrified. The Ford Transit Custom has long been an icon in the van world, thanks to its legendary Transit DNA, but just like the all-electric E-Transit, the Transit Custom is set to join the electric ranks.

This all-new Transit Custom is sure to be another huge success, but with an electric version, it's sure to go one step further and appeal to even more van buyers.

An all-electric range of up to 224 miles is on offer, whilst 125kW fast charging will also be possible in the all-new Ford E-Transit Custom.

Payload and dimensions are still yet to be unveiled at the time of writing, but we are sure they will be class leading, due to the Transit's success over the years. Exciting times ahead for the Ford van range.

At Evans Halshaw we have a great selection of many new and used vans, which include electric and more commonly found petrol and diesel versions too.

Contact your local Evans Halshaw dealership today to arrange a test drive of any van you may have your eye on, or contact us to find out more information about a particular van you may have seen. 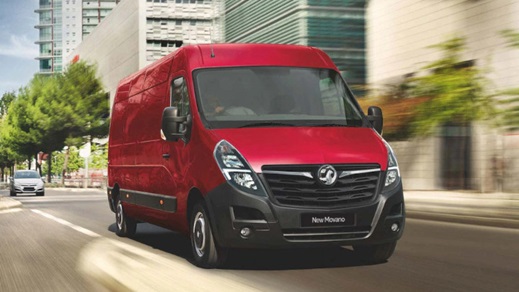 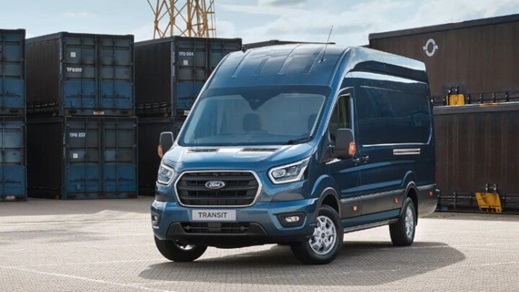