The name Vauxhall Viva has been around for over 50 years. First launched as a Vauxhall Viva HA model in 1963, it was a contemporary of the Ford Anglia and the Morris Minor.

Only as recently as 2015 was the name Viva revived after a gap of 36 years since the last Vauxhall Viva HC model was produced. So, when Paul Moore, a customer of our Evans Halshaw Gateshead dealership, came in to say that he had restored a 1966 Vauxhall Viva SI we were delighted to greet him and to find out more about his story.

You Never Forget Your First Car

Paul has been a fan of the Viva for many years, in fact his first car was a Vauxhall Viva 'HC'. At the time his favourite cars were the Viva HC and Vauxhall Chevette. What made the Viva so popular was its adaptability to modification. The double wish-bone suspension system and the accessibility of the Slant-4 engine of the original HA model made it a real hit with young petrolheads seeking to create their very own hot rod.

The Viva was the first of Vauxhall's range to adopt a new production overhead camshaft system. Driven by a rubber-toothed belt to drive the camshaft, the four cylinders were laid at a 45° angle, hence the name Slant-4, meaning the bonnet itself could sit lower giving the Viva a more aerodynamic profile.

This most original of designs meant that grease monkeys wanting to tune up their engines could do so happily. With simple tools like a feeler gauge or an Allen key, amateur enthusiasts could manually adjust valve clearances within the valve train design to pep up the engine of their Viva. 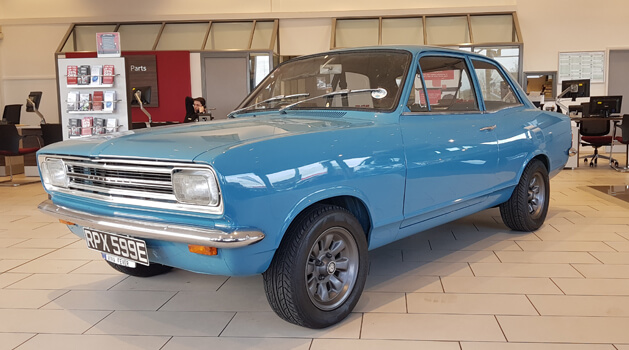 Modifications to the Vauxhall Viva

Paul has had a life-long love for Vauxhalls, he also owns a Meriva and a Corsa. He bought the Viva HB some years ago for the princely sum of £150. The original Viva came under some harsh criticism for its sluggishness when accelerating. Even the GT model, with a 1975cc engine, was slow when compared with its contemporaries, such as the Beetle, Morris Minor and the Ford Anglia.

For this reason, Paul chose to replace the original 1159cc engine with a more substantial 2.3-litre engine. The larger power unit was incorporated into later models, such as the Victor. Combined with an overdrive gearbox, replacing the magnum four-speed transmission it came with. The wider gear ratio gives the classic Viva more legs on the motorway, something it sadly lacked in its original form.

Ask a Man Who Knows

Having discovered the car in a reasonable state, there was much welding required to repair the bodywork to its original condition. One of most challenging issues was repairing the driver side door post. The post had completely corroded through and so Paul called upon the skills of a friend to make the necessary repairs. Paul's friend managed to make the two sides match and carried out all other necessary welding work.
Another mate lent his wiring skills and helped to install the engine. At the third attempt they managed to install the larger 2.3-litre engine into the engine bay.

Finally, to give the Viva a quality finish, Paul took his E reg. Viva to a garage in the village of Winlaton who completed the look with a professional finish to the paintwork.

Asked to compare the two, Mr Moore was understandably biased towards his pride and joy. "I think it outweighs the new Viva in looks and style…. However, if it's a modern, reliable and economical car you want, then the new Viva ticks all the boxes and actually is a reasonably priced car too."
As for value, because original, road-worthy Viva models are so rare, Paul's car being 51 years old, his car is appreciating in value each year and so is of similar worth to the new Viva.

Asked if he would sell the car, Paul said "part of not buying a new car is the hobby side. [you get] a tremendous feeling of achievement when it all starts to come together. Putting the suspension together at both ends and watching the engine start for the first time, these moments were priceless!"

We're sure you will agree that Paul has done a phenomenal job of restoring his classic Vauxhall Viva.

Cars are not about getting from A to B but about connecting people, whether singing along to your favourite songs in the backseat as a child, tinkering with a spanner or gaining your first real sense of independence as you take your car out on your own for the first time. Cars make memories and the memories we create, make us who we are. We feel privileged to be a part of your story. 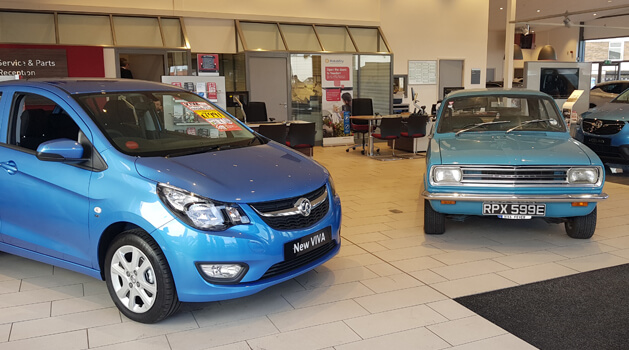 To take a look at the new VIVA, and to see why Vauxhall revived the name, visit your nearest Evans Halshaw Vauxhall dealership or click on the link below to view our offers or arrange a test drive.