It's a dog's life

All members of the family need to be considered when searching for a suitable car, including your four-legged friends.

The UK is a nation of pet lovers so it's no surprise that some people base their purchasing decision on the suitability of the car for dogs. If your dog is a frequent passenger in your car they will need to be comfortable, safe and find it easy to get in and out of the vehicle.

Not sure where to start in your search for a dog-friendly car? Here are 10 cars that boast decent-sized boots with easy access and offer other features such as four-wheel drive or pet accessories. 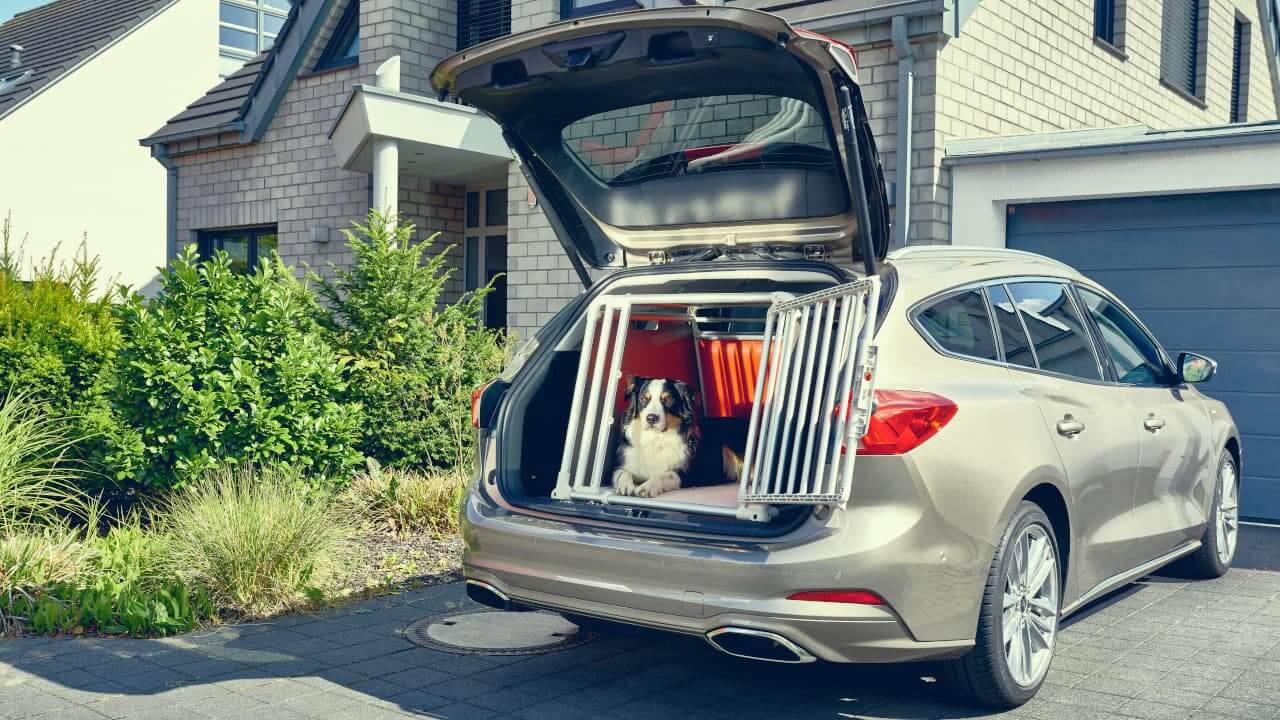 Throughout the testing stage, engineers ensured the largest crate possible could fit into the boot of the Focus Estate. In fact, this car can even transport an Irish Wolfhound, which is the world's tallest dog breed.

Another plus with the Focus Estate is the hands-free tailgate technology, which allows you to open the boot with a simple foot movement under the rear bumper. The rear seats can also be folded flat with a push of a button, which will increase the boot capacity from 575 litres to 1,650 litres.

Plenty of petrol and diesel options are available with a choice of gearboxes, so there'll be a variant to suit everyone. 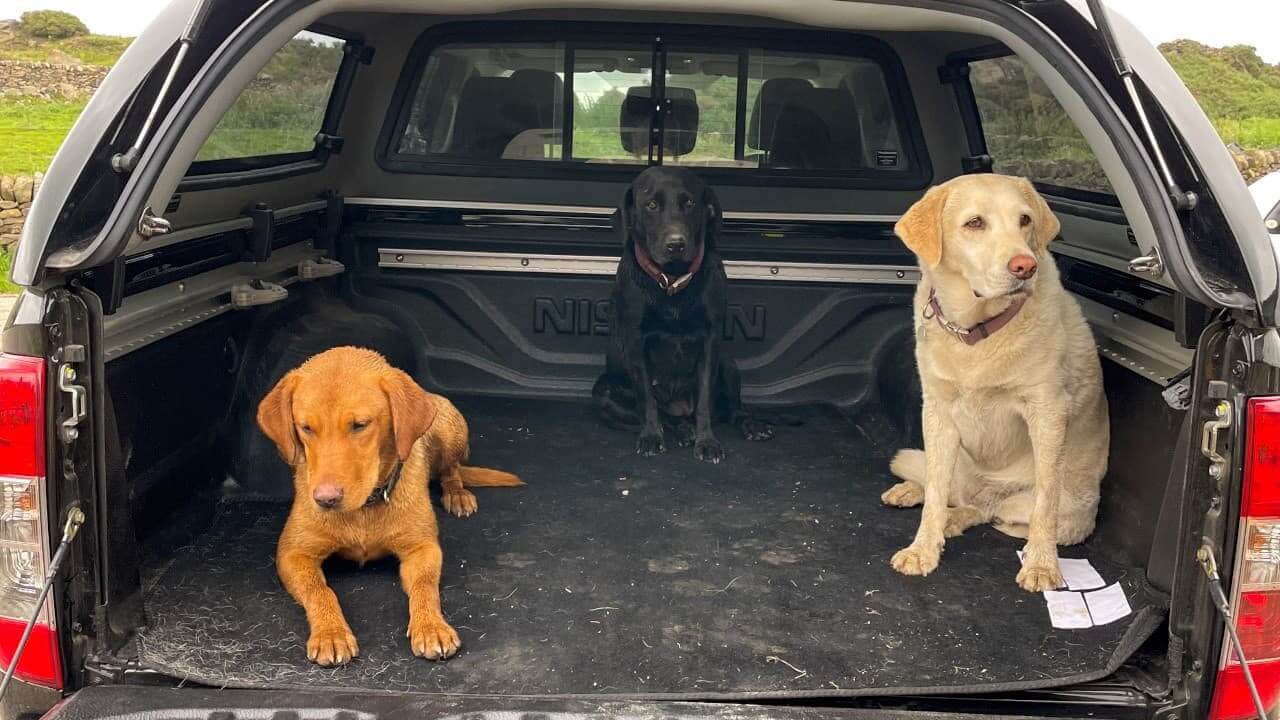 Ok, so the Nissan Navara isn't technically considered a car. With it being a pick-up truck, it's often considered a van.

Don't be mistaken though, despite the Navara's robust and durable exterior presence, the interior is surprisingly car-like. In fact, whilst driving it's easy to forget you're driving a large truck.

If you're transporting dogs, you'll want to consider finding a used example with a load cover or you can look at buying these separately. With a load cover fitted, there's plenty of room in the load area to fit multiple dogs and large cages for restraining them.

Four-wheel drive and a towing capacity of up to 3,500kg make the Navara an excellent vehicle for combining work and leisure as it's just as suitable for a farmer as it is for a family going away on a caravan holiday. 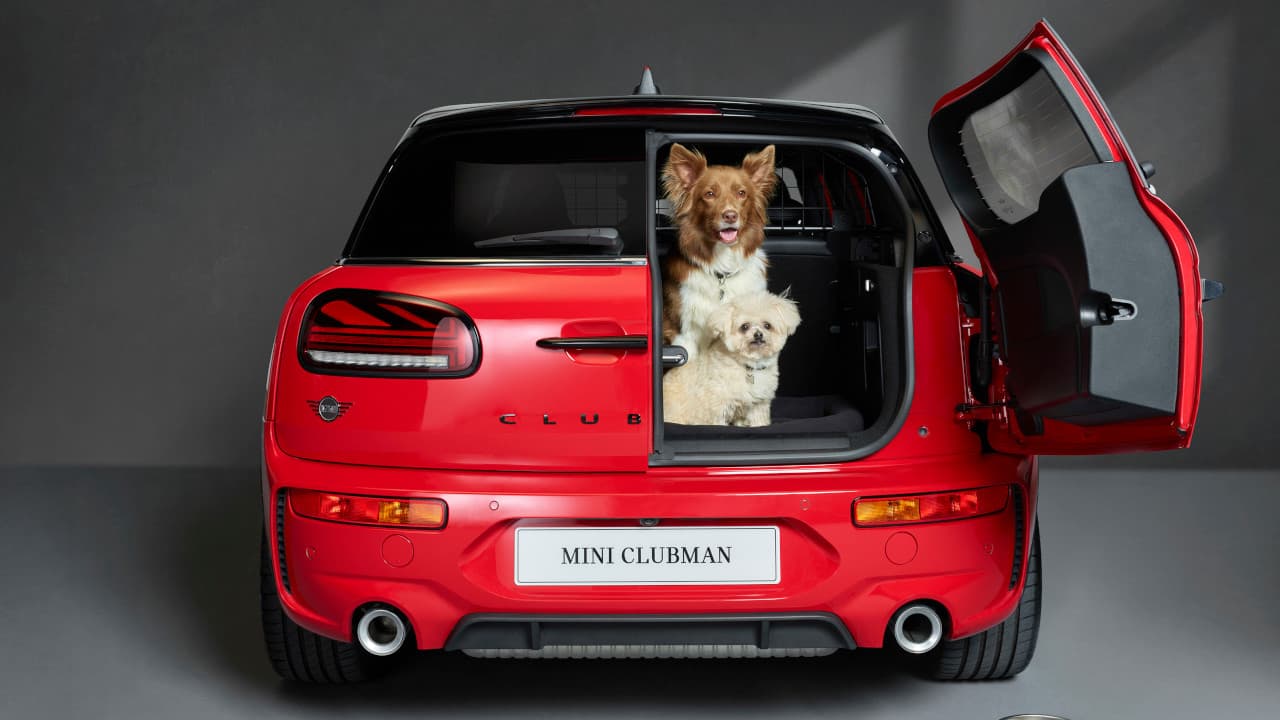 When you hear the brand 'MINI', you may be forgiven for instantly thinking of the small iconic MINI Hatchback. However, MINI have also added the larger Countryman SUV and Clubman Estate to their stylish line-up.

In true keeping with MINI cars, the clubman is quirky and unique-looking. Based on the original 1960s estates, the Clubman has six doors; as access to the boot is via a pair of side-hinged doors.

MINI have a keen focus on aiming the Clubman at dog owners, with a boot loadspace that allows breeds such as Spaniels and Terriers to comfortably stretch out. The brand also offer a range of dog guards to help keep your dogs safe and comfortable whilst travelling in the car.

Performance enthusiasts will be thrilled to hear there is a 302bhp John Cooper Works (JCW) variant, which can race from 0 to 62mph in just 4.9 seconds.

Despite now being owned by the German brand BMW, MINI models feature elements that remind you of its British heritage; such as Union Jack tail lights. 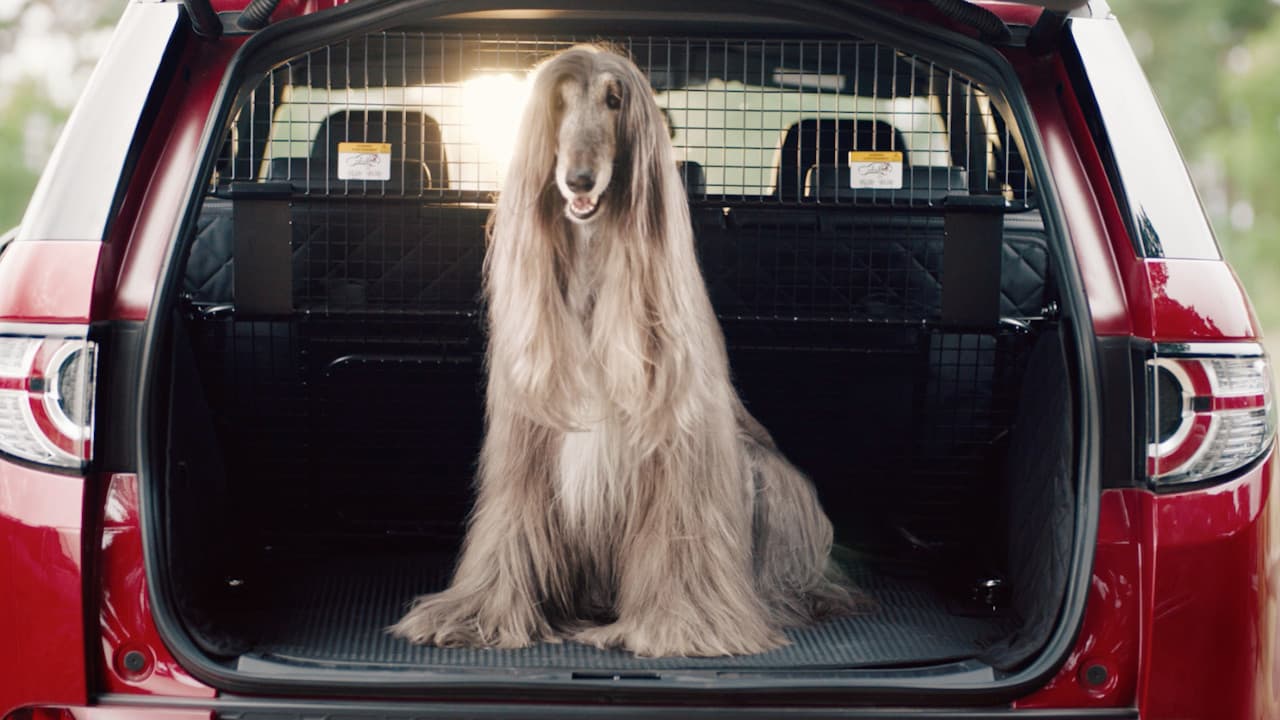 Replacing the popular Land Rover Freelander SUV in 2014, the Land Rover Discovery Sport is one of Land Rover's best-selling models.

The 7-seat models' 194-litre boot can be extended to a 981-litre space with the two rear seats folded down. For an even larger boot the middle row of seats can be folded down, leaving you with an incredible 1,698-litre boot space. Furthermore, the low loading lip makes it easy for dogs to jump in and out.

Additional benefits are the battery powered tailgate and the panoramic sunroof which provides light into the cabin for longer journeys, making the trip more pleasant for dogs.

Crowned Best Car for Dog Owners at the 2019 Auto Trader New Car Awards, thanks to its combination of practicality and quality, the Mazda CX-5 is very worthy of its mention in this article.

Praised for its cabin space, safety and driving experience; the family-sized SUV is comfortable with a sporty feel. Decent materials are used throughout and efficient petrol and diesel engines power the SUV. 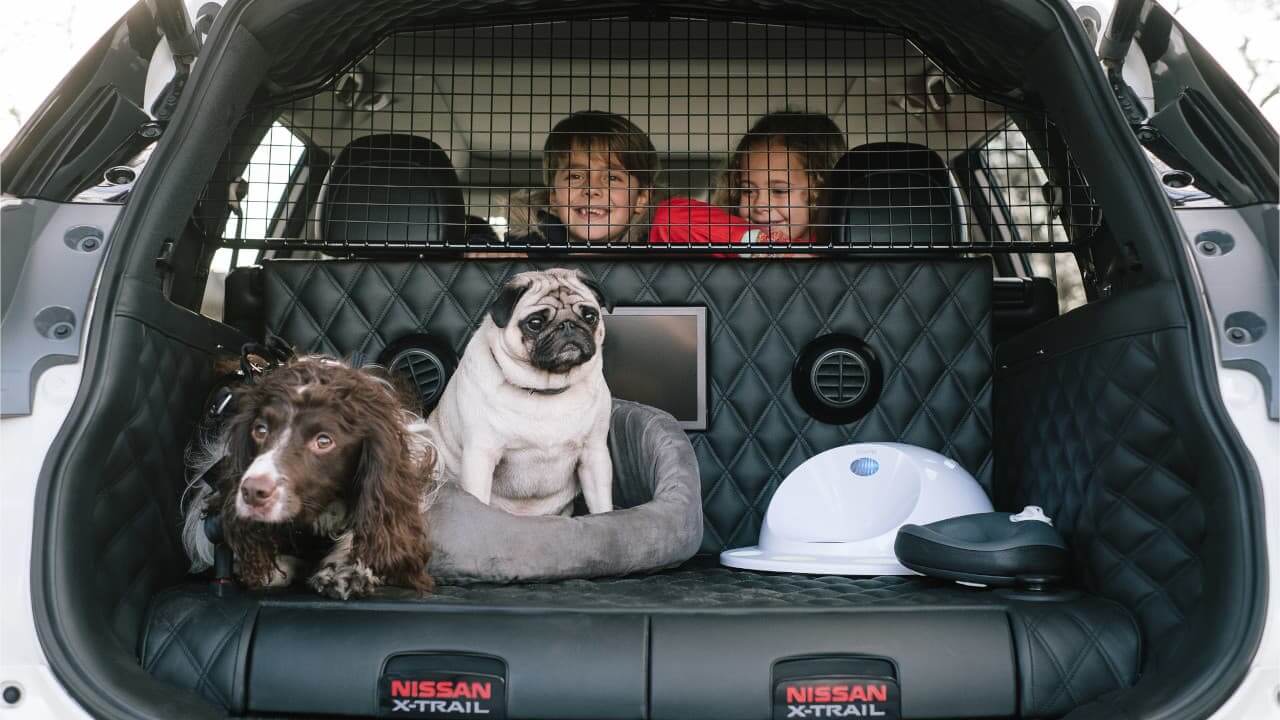 Available as a 5-seater for a 7-seater, the Nissan X-Trail is a family crossover SUV that's a practical option for family adventures, including the pet dogs.

Look for a used example with the optional Paw Pack, which transforms this large SUV into a perfect car for canine companions.

Including a dog guard boot separator, ramp, luxurious machine washable dog bed, a non-spoil water bowl and a boot liner; the Paw Pack makes car journeys more comfortable and safer for dogs, whilst protecting the paintwork and upholstery of the X-Trail.

Post-facelift models (2018 onwards) have an increased boot space of 565 litres, compared to the 550-litre space in pre-2017 facelift versions. Fold the rear seats flat to gain an even larger boot that can swallow up to 1,996 litres of luggage. 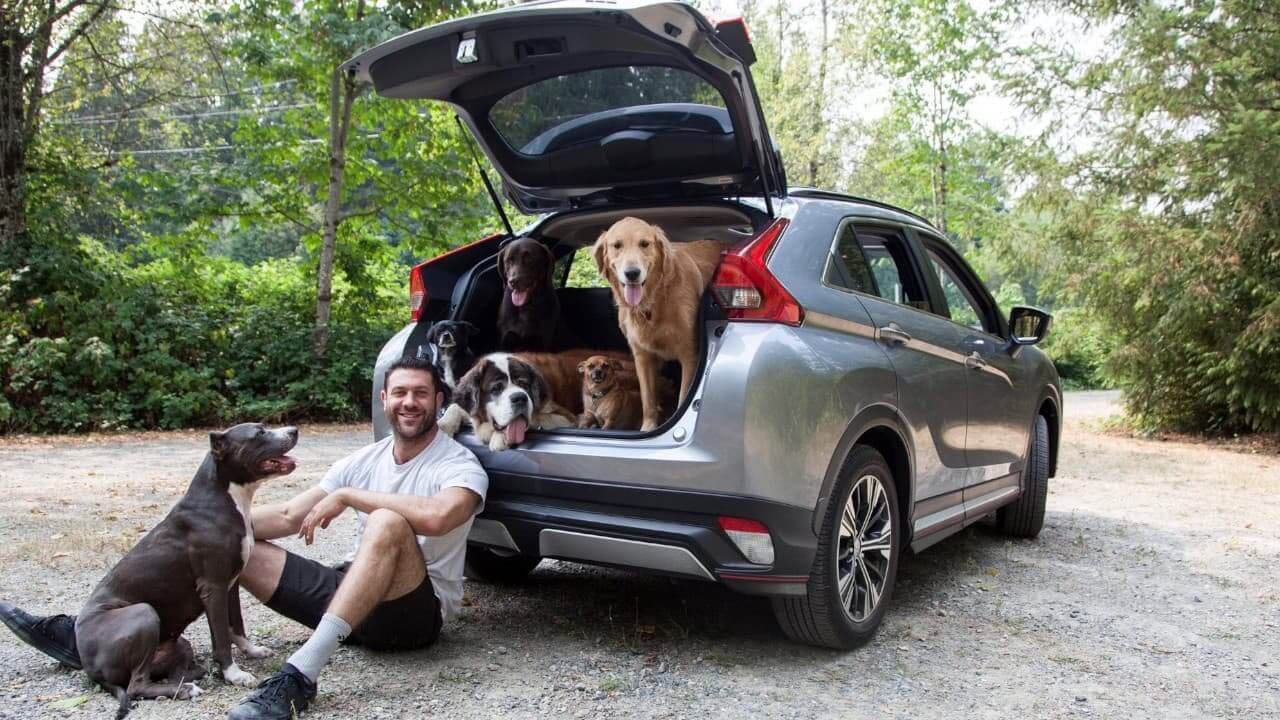 Funky styling with the practicality and comfort you'd expect from a small crossover SUV, the Mitsubishi Eclipse Cross has strong reliability and uses quality materials throughout.

Compared to similar sized vehicles, the Eclipse Cross' boot isn't ginormous, however, it is on par with many hatchbacks, meaning there's plenty of room for a large dog or a couple of smaller dogs. With all seats in place you get 341 litres of luggage capacity but if you don't need much rear legroom you can slide the back seats forward to increase the capacity to 448 litres.

Drivers will appreciate a comfortable driving position with good road visibility, thanks to the increased ride height. 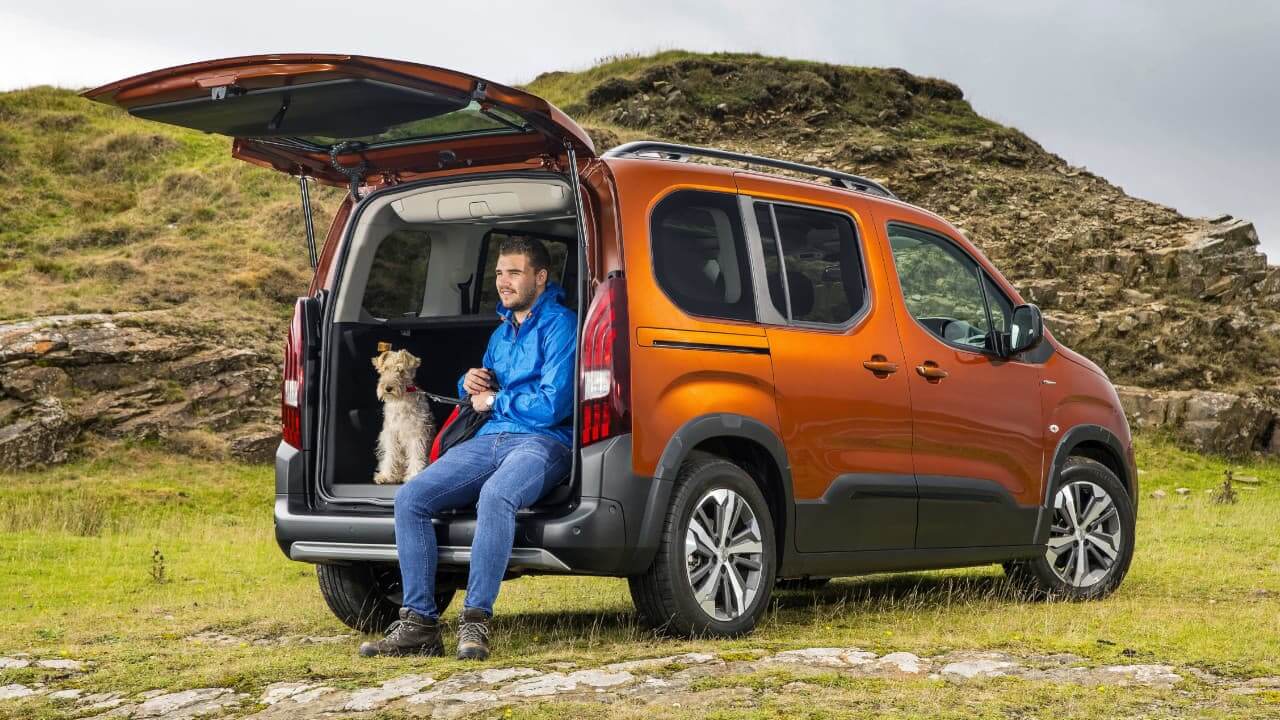 Multi-Purpose Vehicles (MPVs) are becoming less commonplace on the road due to the desirability of SUVs, however, you simply cannot deny that MPVs such as the Peugeot Rifter offer the best levels of practicality and versatility.

Despite being based on a van and identifying as an MPV, the Rifter features strong SUV styling to appeal to the majority of drivers who'd pick and SUV over an MPV.

With the ability to seat up to seven people, with acres of head and legroom for all occupants, the Rifter also has a massive boot with 775 litres of space at your disposal; enough room for a pack of dogs. The large boxy opening and low loading sill make it super easy for smaller dogs or dogs with mobility issues to get in and out of the vehicle.

SUVs aren't for everyone, if you're wanting to purchase a dog-friendly hatchback the Volkswagen Golf is a great option. The main positive is that it isn't as far for dogs to jump in and out the boot, as the Golf is a lot lower than the majority of SUVs.

Out of this list of cars the Golf may not have the largest boot, however, for a hatchback the boot is certainly a well-shaped, decent size with a capacity of 380 litres. This storage space can be increased to 1,270-litres by folding down the 60:40 rear seats.

The model pictured is actually a Golf R, which has a slightly smaller boot with a capacity of 343 litres, but as you can see the space is more than adequate for a Labrador.

A wide opening and low load lip make the boot accessible and more dog-friendly, whilst accessories can be purchased that will protect your car from muddy paws such as a boot loadliner and a dog guard to keep your dog secured in the boot.

Being the largest SUV in Skoda's range, the Kodiaq can seat up to seven occupants and still manages to offer a boot loadspace capacity of 270 litres, even with all seven seats in position. On the other hand, 5-seat versions provide a massive 835 litres of space for multiple dogs or larger breeds. Fold away all of the rear seats and you'll be presented with a humungous 2,065 litres of boot space.

In terms of looks. the Kodiaq is head-turner from the exterior, with a striking appearance. Step inside and you're welcomed by a comfortable, modern interior that is functional and family friendly.

Finding the right car for the family can be a challenge in itself, but finding a car that's suitable for dogs too can be even more difficult.

You need to know there's plenty of room in the car for them, check they can get in and out of the vehicle easily and perhaps you want to ensure you can protect your car's paintwork and upholstery from muddy paws and sharp claws.

The 10 cars above are just a selection that make excellent choices when it comes to transporting your four-legged friends, but there's plenty more available in our extensive used car collection. We also regularly update our blog section with buyer's guides if you still need more inspiration on your next car. 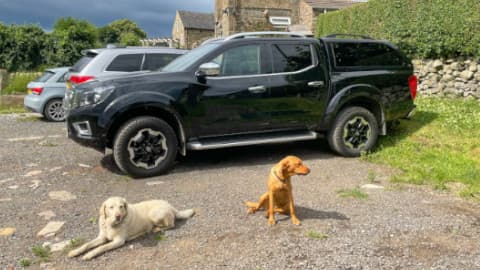 Car Safety: Travelling with a Dog in the Car 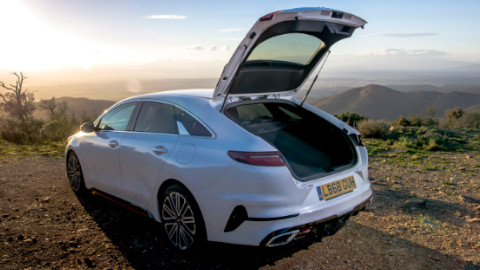 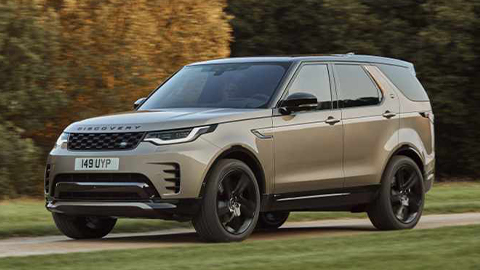 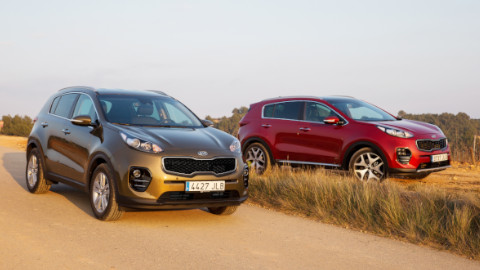