Evolution of the Ford Transit Van

The Ford Transit is one of the most successful van models in Europe and has been the best-selling van in the United Kingdom for more than 40 years.

For those who don't know, the Ford Transit is a range of Light Commercial Vehicles that have been produced since the mid 20th century to help professional working people get on with their daily business.

Although the first official generation of the Transit was launched in 1965, the birth of this iconic model harks back to the 1950s when Ford Cologne, in Germany, released the Taunus Transit. It had a 1.3-litre engine (extended to 1.5 in 1955) and was very similar to the Volkswagen Transporter of the time.

It was the success of this platform that inspired Ford to build on the foundations and create the success story we see on the roads every day.

Launch of the Ford Transit

The model's remarkable success had to start somewhere, and when the first Transit hit the UK it was a revelation. Space was one of its main advantages, boasting much more cargo room than its competitors.

The style was very American with its wide body and square shell, which seemed to make a great impact on UK customers. Buyers had so much choice in the Transit offering: pick-ups, minibuses, panel vans and crew-cab versions, with the choice of diesel or petrol engines.

The shape remained largely unaltered for 12 years until 1978, when the Transit was given a major facelift, which included a new front end and an updated interior. The mechanics of the vehicle were also overhauled, with the Pinto engine being introduced from the Cortina.

The first 'fast' Transit was also manufactured, utilising the well-regarded Essex V6. An automatic transmission was also available for the first time.

The appearance was totally modified for the second-generation Transit. The windscreen was distinctively slanted to match the angle of the bonnet, and thanks to a simple box-like design, it stood on its own on Britain's roads.

Quality of ride and handling was improved by having an independent front suspension system (only on short wheelbase models). The accessibility and visibility were improved, while the engines stayed the same. However, the 'fast' Transit engine was replaced with a modern 2.9-litre fuel-injected Cologne unit.

A welcome facelift came nine years after its introduction. The update didn't introduce any dramatic changes to its features, and after 30 years of success, why would they want to change? The main aim was to introduce more comfort into the Transit.

Ford added options such as air-conditioning, central locking, airbags, electric windows, and electric mirrors to embrace the technology available at the time. With its improved spaciousness and comfort, the Transit was not just seen as a commercial vehicle, but as a handy and practical van for private use.

The third generation was available in either front or rear-wheel drive, which was a first for a Transit. This enabled buyers to have the choice between a lower loading height and more space, or improved towing and load carrying capabilities.

The Transit also received sharp styling that mirrored features of the company's cars of that period, such as the Ford Focus. Following 40 years of commercial success, the five-millionth Transit rolled off the production line in 2005.

Facelifted in 2006, the Transit featured a host of upgrades and improvements. As well as the exterior makeover, the interior was revamped to make it more comfortable and ergonomic.

This was the period when the Sport Van was first introduced, with the sporty body kit, racing stripes and large alloys; appealing to those who loved fast Fords but needed a van for work.

With the new TDCi engines introduced, improving economy and emissions, this generation of Transit was highly regarded among working professionals.

Ford created a double cab Transit model for this generation, with its main purpose being to carry up to seven people, while boasting up to 10.6 cubic metres of flexible load space.

There's a choice of medium, long, and extended wheelbases to make sure professionals have access to a vehicle that best suits their needs and requirements, as well as having the option to specify a taller vehicle.

The current Transit range is made up of the Transit Courier, Transit Connect, Transit Custom and of course the full-size Transit. These models are well catered for from an aftersales side, with Ford launching dedicated Transit Centres up and down the UK in 2015.

Still in two wheelbases and a variety of cab styles, the Custom takes its design cues from Ford's car range with an interior reminiscent of the Fiesta and Mondeo. A passenger version has also been manufactured, named the Tourneo Custom.

Widening the Transit range only serves to broaden its appeal - another masterstroke by Ford. Now widely recognised as the backbone of British business, the Transit Courier, Transit Connect, Transit Custom and full-size Transit all have something to offer professionals who need a tough, reliable and practical van.

The ever-expanding range also includes the passenger versions of the Transit; the Tourneo Courier, Tourneo Connect and Tourneo Custom.

At Evans Halshaw, our dedicated Ford Transit Centres are able to supply customers with both New and Used Ford Transit models, as well as the Tourneo range too. 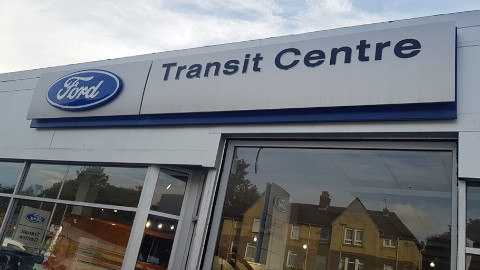