The History of the Peugeot GTI

Take a look through the back catalogue of Peugeot's famed GTI models.

A long lineage of legends

Peugeot have an illustrious history of creating hot hatch icons. It all started with the 205 GTI way back in 1984, when those three letters adorned a Peugeot vehicle for the very first time. Instantly, the French manufacturer had created a legend.

Throughout the years, Peugeot have released several different hot hatchbacks, all infused with the spirit of the little 205 GTI. Inevitably, every model that has followed has been measured against the 205 GTI, with many considering the first iteration the benchmark hot hatch.

Here we take a look through the back catalogue of Peugeot GTI models from the past, to learn more about what makes these cars so special.

Widely considered the pick of all GTI-badged cars - and not just from Peugeot - the 205 GTI was released in 1984. This pretty little pocket rocket had all the style and panache that the French are known for, and crucially, it was more than £1,000 cheaper to buy than a Volkswagen Golf GTI.

It was launched with a 1.6-litre 105bhp engine, which was later revised to 115bhp. The car was incredibly light-weight at 850kg and the power to weight ratio was fantastic. The ratio increased still further with the introduction of a 1.9-litre 130bhp power plant in December 1986.

Arguments on internet forums still rage today about which was the better engine, with fans of the 1.6 insisting that despite being slower than the 1.9, it was a sweeter engine which suited the characteristics of the car better - not to mention the 50kg weight saving over the 1.9.

The extremely low weight was one of the brilliant things about the 205 GTI, as it contributed to the scintillating handling the car is known for. It corners flat with very little body roll, and the front wheels respond to every single input made via the particularly small steering wheel.

The Peugeot 309 GTI was, and in some circles still is, considered to be a poor relation to the 205 GTI that has thrilled the world ever since it was launched. The 309 wasn't even meant to be a Peugeot when it was conceived; it was designed to be the replacement for the Talbot Horizon, but Peugeot bosses made the call at the last minute to axe Talbot and so the 309 was born.

Despite sitting on a stretched 205 platform, the shell was not designed by Pininfarina like the rest of Peugeot's model line-up at the time. It was instead designed and built in the UK and while at the time the looks didn't prove popular, the styling has aged relatively well.

Because it borrowed so many parts from the 205 GTI (including the engine and gearbox) it still drove just as well as its hatchback sibling. Some people even claim that it's actually better to drive than a 205 GTI because of the longer wheelbase that resulted in more even weight distribution, relieving the old 205 problem of snap lift-off oversteer. 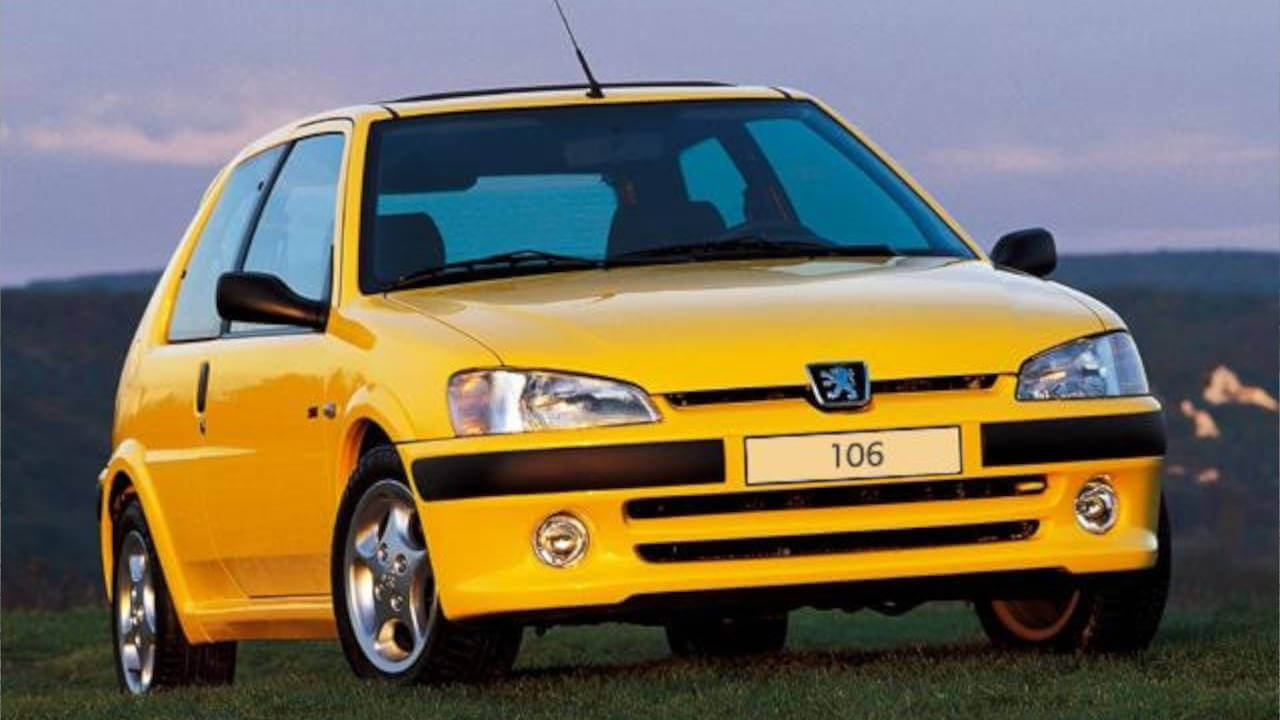 The next hot hatch off the Peugeot production line was the 106 GTI, and it was another little cracker. With a 120bhp 1.6 engine and weighing just 950kg it had less power and was (slightly) heavier than the 309 and 205 before it. However, thanks to a more efficient power plant and transmission setup, it was much faster from 0-60mph.

Built in conjunction with the Citroen Saxo VTS, the 106 was actually slower to 60mph than a car with the exact same engine and body (apart from the bumpers), but the Saxo simply had a very long 2nd gear - presumably just to bring down the headline 0-60mph time. Peugeot however stuck to their 'drive of your life' principles and used slightly shorter ratios, making the car more satisfying to drive.

The ride was excellent and the handling was straight out of the 205 copybook, leading Jeremy Clarkson to state that it felt like it was rear-wheel drive - the highest award you can bestow upon a front-wheel drive car. It had excellent front grip and could easily embarrass bigger, costlier hot hatches on narrow twisty roads.

On top of all the hot hatch performance and handling brilliance, it was small enough to drive round town and big enough to fit a family in, with a practical boot and decent interior space. 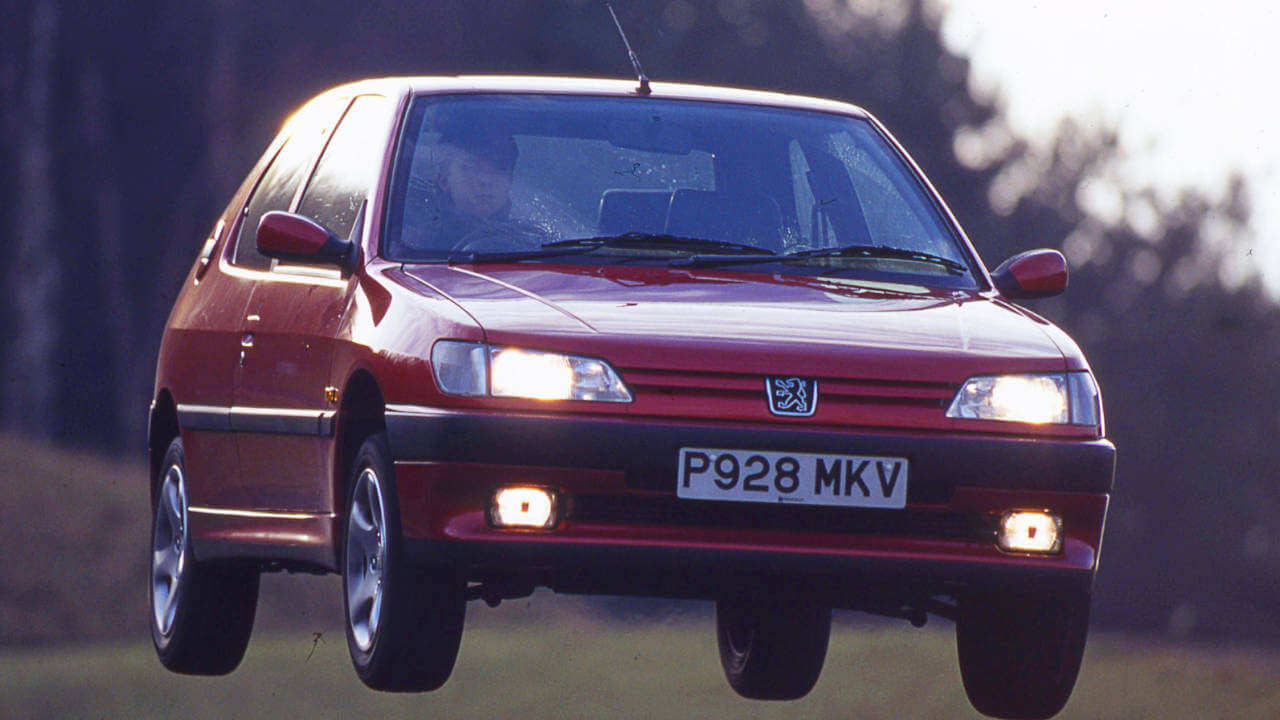 Released in 1996, the GTI-6 was given its name because of the excellent 6-speed gearbox mated to its 2.0-litre engine - a first for the class - that was engineered by Peugeot's motorsport division.

You could definitely tell it was inspired by racing; cog changes were quick, precise and smooth; leading some journalists to proclaim that it was the best gearbox ever fitted to a road-going Peugeot.

That gearbox, mated with the free-revving 4-cylinder 167bhp engine, was a fantastic combination that made for yet another hot Peugeot hatch that was great fun to drive.

There was nothing fancy about the suspension setup, but because it stuck to the lightweight principles of the 205 and 309, it had all the responsiveness and agility of its predecessors. It weighed just over 1,200kg which made for an extremely involving driving experience, and it won virtually all the hot-hatch group tests conducted by car magazines in the '90s.

Although the Phase 1 model was a good-looking car, the Phase 2 version was even prettier and its looks have stood the test of time wonderfully. 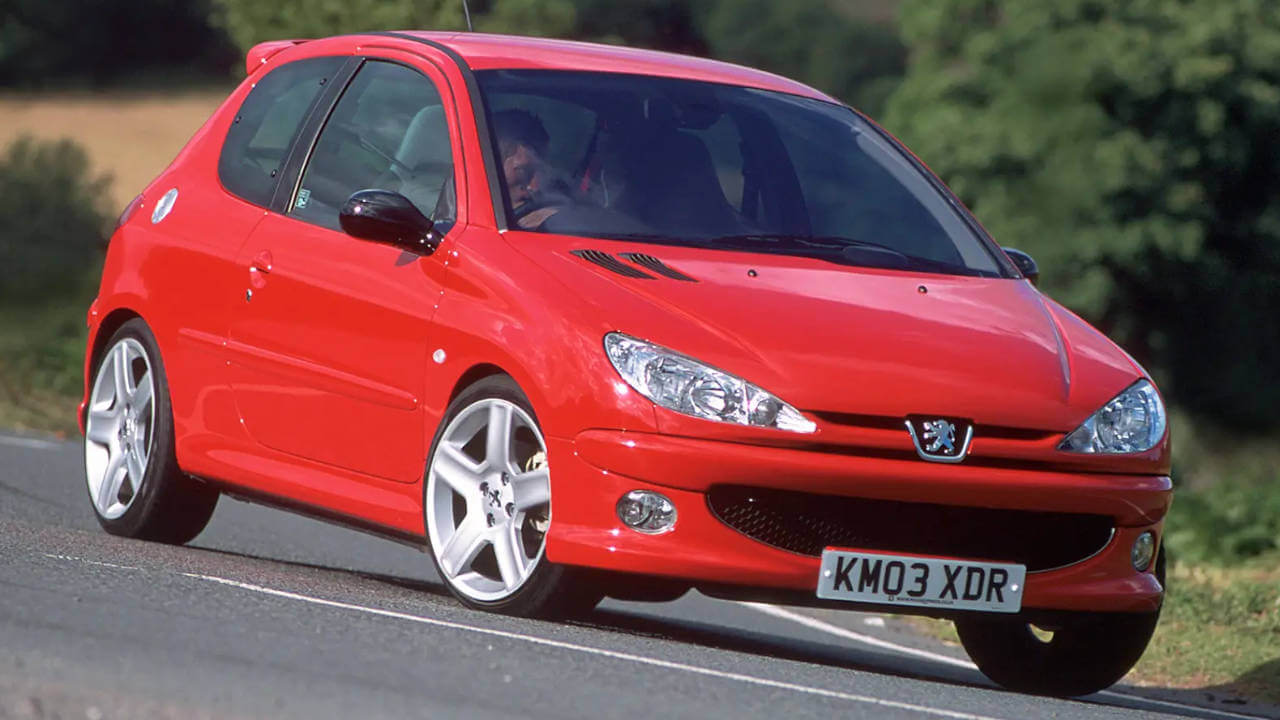 The 206 GTI 180 came about after the release of the 134bhp 206 GTI, which was far from critically acclaimed. It had nowhere near enough power to compensate for all the extra weight being lugged around by the 206, thanks to its extra safety gear. It was even out dragged by the likes of the 'hot' Rover 200! Peugeot decided to rectify the problem by adding significantly more power in 2003.

The 180 also received more aggressive styling, including a bigger rear spoiler, body-coloured bumpers and bigger alloy wheels - nobody could say that it didn't look like a GTI anymore.

Those 180 horses definitely improved things, as it was now a quick car. Peak power came high up in the rev range and there was joy to be found from thrashing the engine enough to find it.

The handling was good if not great, and it lacked the sparkle of previous GTIs. Unfortunately for Peugeot, it was possible to find this sparkle in the RenaultSport Clio 172/182, and that car was now the new benchmark for hot hatch handling.

The 206 was not without its merits, though. It was very well equipped and it had quite a supple ride despite the beefed-up suspension and larger alloys of the 180, making it much easier to live with than the Renault.

20 years after the featherweight 205 reared its beautiful head and the GTI just kept getting bigger. It was getting heavier, too, but this allowed it to be the first GTI to be awarded a 5-star NCAP safety rating. It also reverted back to a 1.6-litre engine.

That engine was a THP (Turbo High Pressure) unit and developed a not insignificant 173bhp. Even more significant was the 177lb ft of torque that it possessed, and that it was available from low-down in the rev-range, giving it a totally different character to the engine in the 206 GTI.

The engine is the highlight of the whole car, and it's no coincidence that it was co-developed with BMW, who used it in the MINI Cooper S. It offered good power, strong torque and decent fuel efficiency - something never previously associated with Peugeot GTI models.

When it was launched, Peugeot claimed the 207 GTI was their hottest-ever hatch and that it was 'just as exhilarating' as the 205. Unfortunately, this was not the case. While the front end provided good grip, the steering was electrically powered and though accurate it lacked the feel of GTIs from the past. 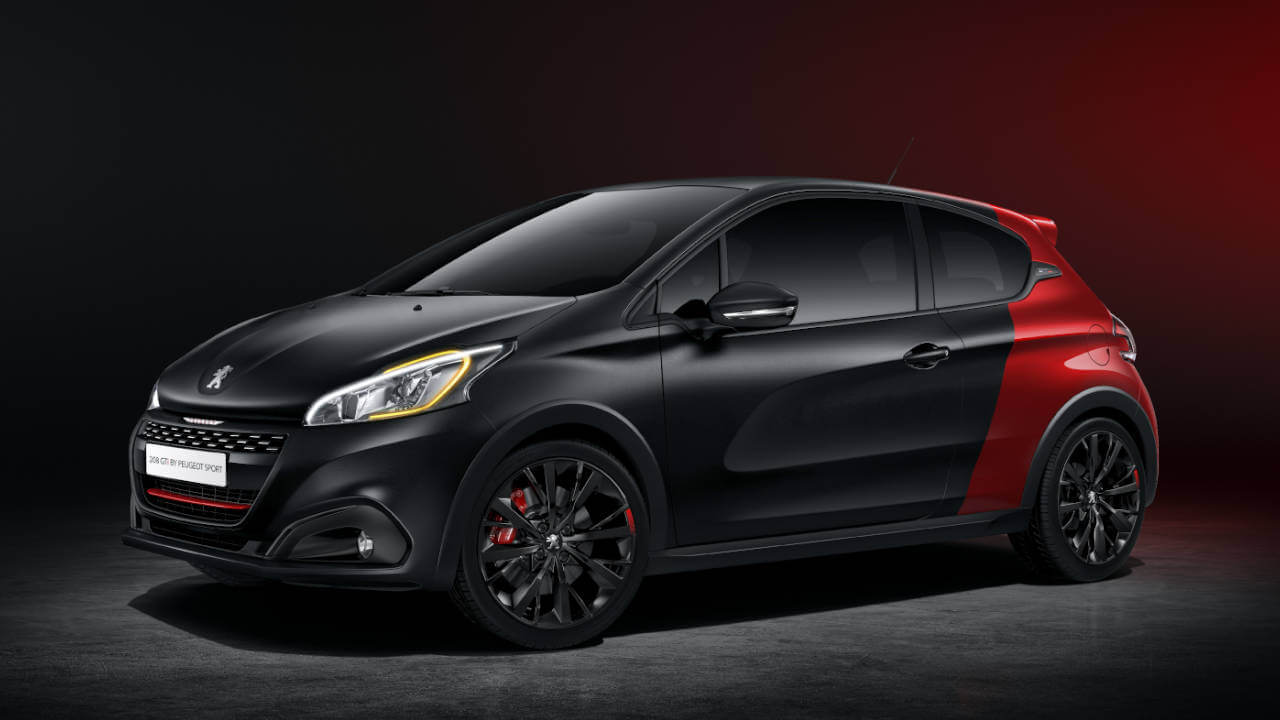 The Peugeot 208 GTI was certainly a return to form for Peugeot and their performance range. It was 165kg lighter than the previous 207 GTI 175 and you can really feel the difference in the driving experience, particularly in the bends.

With stiffer anti-roll bars, sports springs and upgraded dampers, the car grips brilliantly around corners. One thing that modern cars have over the '80s and '90s stuff is the use of clever electronics.

The 208 does without a mechanical limited-slip differential, instead using electronic stability control to redistribute torque to the wheel that has the most grip. It corners flat and true and has managed to regain some of the suppleness of previous cars as well.

Both the exterior and the cabin are rife with GTI cues. Outside, there's a large rear spoiler, 17-inch alloys, racey red calipers and a new front grille that - apparently - resembles a chequered flag. Inside, there's red trim on the dash and dials, a metallic effect gear knob, alloy pedals and a prominent GTI badge on the steering wheel. Red stitching on the seats and dashboard completes the effect.

EVO magazine declared it as the best Peugeot hot hatch in years (presumably since the 306 GTI-6). It was the choice of the hot hatch enthusiast that also has a more grown-up streak, with the 208 GTI offering more refinement than its contemporary rivals, particularly at cruising speeds. The engine is a gem and it's remarkably economical considering the sheer pace that it provides.

A 30th anniversary model (pictured) was released in 2014, celebrating 30 years since the launch of the 205 GTI. 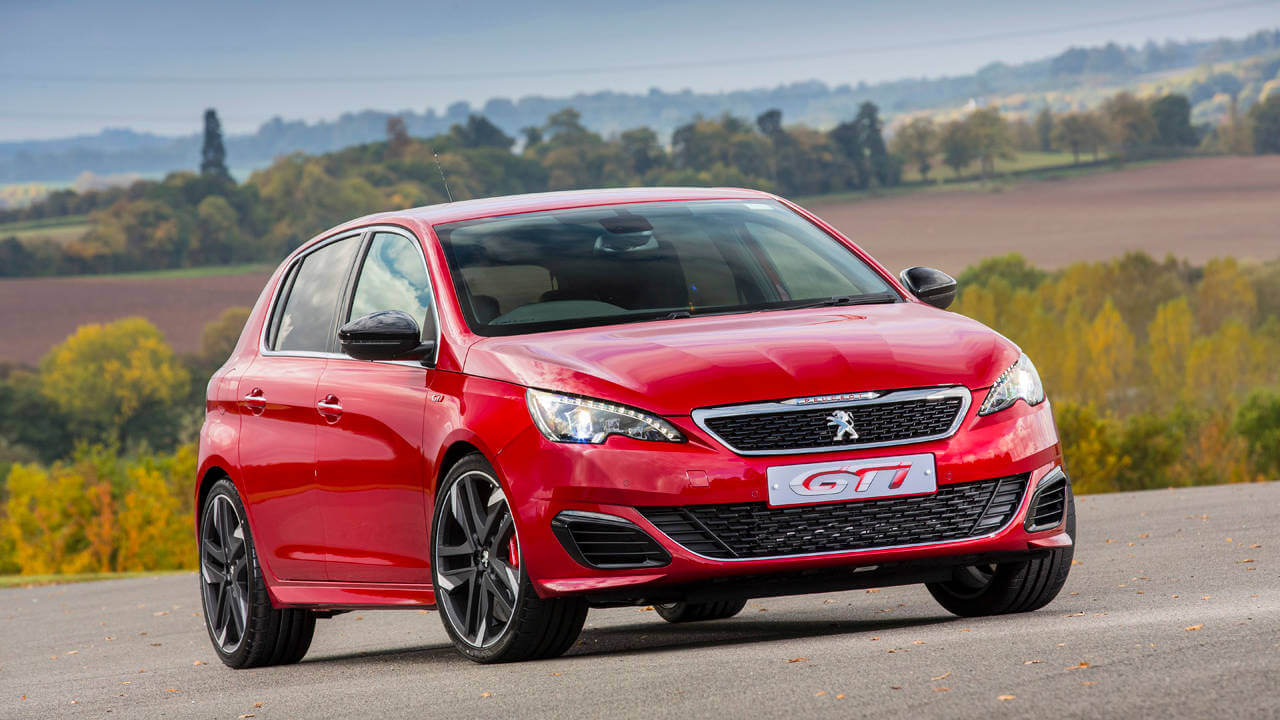 Quite simply, the 308 GTI is the most powerful GTI model Peugeot has ever built. It shows too, with the 266bhp enough to power the 308 GTI from 0-62mph in just six seconds. The engine revs smoothly and there's a delicious 243lb ft shove of torque from just 1,900rpm.

Going under the radar has never been a goal of a Peugeot GTI model, with the styling usually pumped-up enough so that you can instantly tell it's something special.

The 308 GTI is a little different in that respect, with only subtle cues such as the sporty-looking alloys, twin exhaust pipes and a red stripe on the front grille letting you know about the car's performance potential.

Journalists rave about the ride and handling of the 308 GTI. It's widely praised for its taught body control and thrilling driving characteristics. Top Gear even claim that it has a "wild side", unlike many modern hot hatches which have been sanitised by safety legislation and consumer demand for ever-increasing levels of comfort.

Experience Peugeot GTI for yourself

At Evans Halshaw, we fully understand the tremendous engineering that goes into each and every Peugeot GTI model. Our Associates aim to replicate the level of attention to detail that is adorned upon these models in the service that we provide to our customers.

We regularly carry in stock a selection of excellent used examples of the 208 GTI and 308 GTI, while our Peugeot dealerships are able to help you through the ordering process for a new Peugeot Sport model, too.