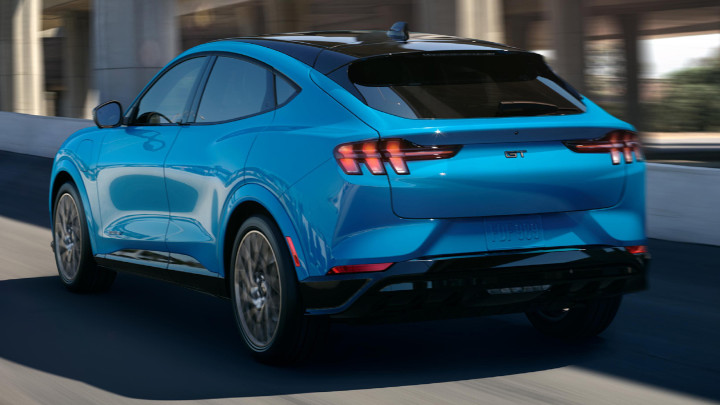 The Ford Mustang Mach-E GT is a state-of-the-art fully-electric SUV. Is the Mustang name justified? It may not sound like a V8, but it's actually faster from 0 to 62mph.
View Offers

After making a name for itself on the electric car scene with its dynamic Mustang Mach-E, Ford is back with an even more powerful GT version – which is fast enough to give you whiplash.

That’s enough power to rocket it from 0 to 62mph in a breathtaking 3.7 seconds and make it a credible alternative to the fastest Tesla models and even the Porsche Taycan.

But power like that inevitably comes at a price. And in the case of the GT, that price is significantly more than the entry level Mach-E rear-wheel drive version.

With the addition of a few extras like a panoramic glass sunroof and exclusive eye-popping Cyber Orange paintwork, my test car had a price tag of just under £71,000 at the time of testing.

So is it worth shelling out that extra cash. And if so, what does it buy you?

Well for starters, this is a car to get noticed in with even more macho looks than the standard model, sleek sports car styling and curves in all the right places.

20-inch cast aluminium wheels are fitted with 19-inch Brembo brakes with their distinctive red calipers to catch the eye of performance enthusiasts.

And on the subject of battery charge, Ford claims the car has a range of 310 miles which, while possible, is ambitious.

When I charged the car to 96 percent of its capacity, it was showing a range of 263 miles.

With such a hefty price tag, you only buy the GT version for one thing – performance. And when it comes to performance, this model is up there with the best of the best electric SUV models.
Edward Stephens

Accelerate hard at low speeds, and the force is such that you feel as if you could almost end up in the rear seats. But even at the motorway speed limit the GT delivers in the blink of an eye to the merest blip of the accelerator, and you really have to curb your enthusiasm if you want to stay legal.

The ride on this high-riding SUV is firm but comfortable, with the MagneRide Suspension ensuring plenty of grip with minimal body roll.

As with the rest of the Mustang Mach-E range, there are three switchable driving modes – whisper, active, and untamed – with each one offering more exciting performance than its predecessor.

And just in case you find the silence of an electric car a little boring, you can switch on the “propulsion sound” while in untamed mode to mimic engine noise. There’s also the option to drive in one pedal mode, using the accelerator to both increase speed and – as you lift off – brake.

It’s an acquired taste, but if you use it, it dramatically helps retain what battery charge you have, even if it doesn’t add to it.

Step inside and, as with the standard Mustang Mach-E, the first thing that you notice is the huge 15.5-inch iPad-style central touchscreen – similar to that on a Tesla – to activate all onboard operations.

Unlike on a Tesla, however – where the screen also displays the car’s speed – the Mustang Mach-E has a separate 10.2-inch digital cluster immediately in front of the driver showing speed, state of battery charge, and range.

Apart from the dominant central touchscreen the dashboard itself has a minimalist appearance, but that’s partly due to the fact that a large section of it is made up of a Bang & Olufsen sound bar to compliment the door mounted speakers as part of a 10-speaker system.

Sports seats on the GT come in a classy mix of leather and suede and are 8-way electrically adjustable and heated.

The Mustang Mach-E GT may be a totally different pony to the legendary V8 Mustang muscle machines seen in Hollywood films, but there’s no denying it has the sort of performance that does credit to that iconic name. 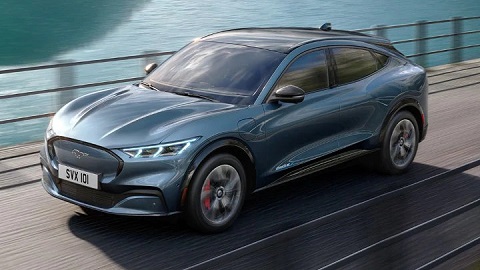 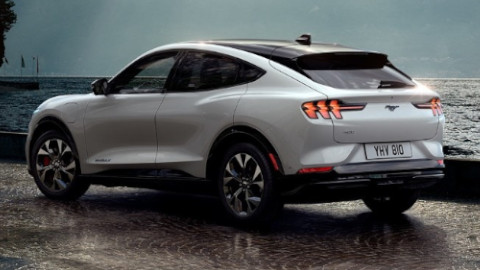 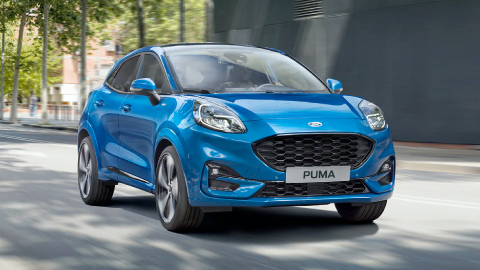