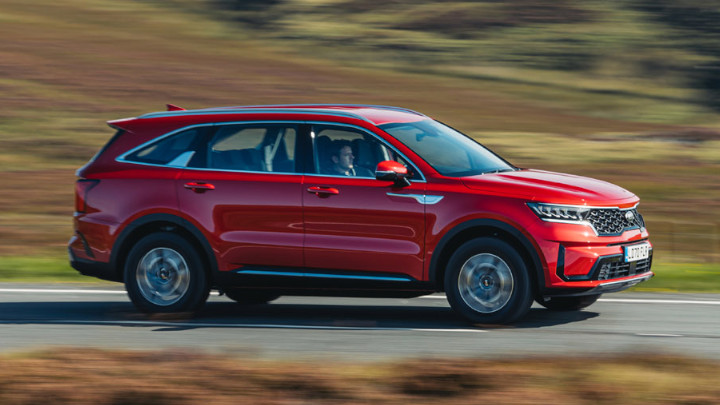 The Kia Sorento has been a popular choice for well over a decade, and the latest version takes the name into a new league.
View Offers

The Kia Sorento is coming of age with the arrival of the fourth generation model that’s ready for the electric age.

Bigger and more stylish than before with plenty of kit and technology on board, the new Sorento also has a petrol-electric powertrain as well as a diesel option.

It's more expensive than the previous generation, with plenty of variations to choose from, but it's much more sophisticated.

Since it first appeared back in 2003, the Sorento has been the flagship of Kia’s SUV range in the UK, and the newcomer is no different.

It takes much of its innovation and style from the even larger Kia Telluride – a car that’s not available in Britain – and that has been voted World Car of the Year for 2020.

By British standards, the Sorento is big – it measures some 4.8 metres long – and is a 7-seater with a generous amount of luggage space.

Not only is the new Sorento powered to impress in the large SUV market, it's also styled to stand out, with nicely crafted angular lines replacing the somewhat rounded look of its predecessor.
Chris Russon

Space inside is much bigger than before, and a sliding middle row of seats has created the option of a great amount of legroom.

There’s also more headroom in the back two seats and as a 7-seater there’s a city car 179 litres of boot space with all seats in use. That goes up to 813 litres as a 5-seater and a massive 1,996 litres with all rear seats folded.

That’s on the hybrids, and there’s even more room available on the diesel – although the difference is marginal.

All but the diesel offering have a mild hybrid power setup, and if our first drives are anything to go by, the system is nicely economical.

It uses a 1.6-litre petrol engine mated to an electric motor which combined deliver a total of 226bhp giving more than enough performance with a 0 to 62mph time of around 8.7 seconds and a maximum of 119mph.

But it's on the fuel front where the system scores best, and on our runs we saw a best average of 44.2mpg, outstripping the official return of 40.9mpg by some margin. Emissions range from 158g/km in entry level '2' grade to 168g/km for top specification level '4' trim.

On paper, the diesel may look more economical with an official fuel figure of 42.2mpg, but over a similar route to the mild-hybrid version we saw an average of 38.7mpg. Emissions for the diesel are higher too, with it having a CO2 figure of 176g/km.

The diesel is a 2.2-litre which develops 199bhp and that too lacks little in pulling power – towing is up to 2.5 tonnes, almost a tonne more than the petrol.

It has an 8-speed automatic gearbox, while the petrol versions are 6-speed autos. All are four-wheel drive and come with Kia’s latest electronic traction system with specific modes for off-road conditions.

The cabin is vastly improved from before and has much more technology, including a 12.3-inch multi-function instrument panel as well as a 10.25-inch touchscreen on the centre of the dash on all but the entry level '2' grade.

The '2' grade Sorento doesn't have sat nav, but that’s a feature of all other grades which have the Korean carmaker’s Kia Connect system as standard, which can give live traffic and service information such as fuel prices and parking availability.

All versions are smartly trimmed, and although the '2' grade version has cloth upholstery, the higher grades have leather trim and all have a sophisticated ambient interior lighting system that apparently has 64 different colour choices.

A powered tailgate and keyless ignition are features of the higher grade Sorento models, and all versions have a good amount of driver assistance equipment.

On the level '4' Sorento, the technology is even more impressive and includes a head-up display and a high definition blind spot camera display which appears in the instrument panel when traffic approaches.

It’s a classy and useful feature and supplements a surround-view camera system which can be seen through the central display panel to assist manoeuvring.

As modern SUVs go, the latest Sorento is a class act and a car which embraces all in the sub-£50,000 market. Loaded with technology, and as spacious as they come, you'll struggle to find an SUV that can match what the Sorento has to offer.

A plug-in hybrid derivative has also arrived, adding another string to its bow, but whichever powertrain you choose, you can bank on reliable performance and impressive efficiency. 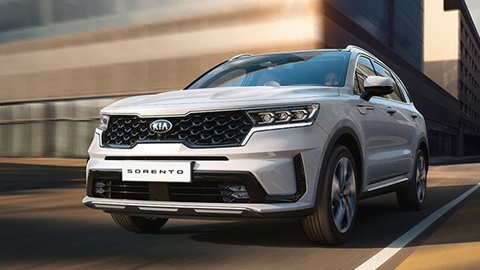