The Kia EV6 GT Line S comes with a range of advanced technology and an ultra-sharp design to ensure it stands out from the EV crowd.
View Offers

Korea's Kia brand is on a roll. Its new pure-electric EV6 is Car of the Year 2022 after less than six months on sale, and that bodes very well with petrol and diesel prices going through the roof.

It also comes just after the 30th anniversary of the brand being launched in Britain with the Kia Pride, when it racked up 1,800 sales in its first 12 months.

Its Slovakian factory opened in 2006 and has been making models designed and tested in Europe, which has given it a big step-up.

The EV6 has beat 60 other new cars, electric and with internal combustion engines, to the coveted CoTY award judged by 59 motoring journalists from 22 European countries.

It's the first Kia to win the internationally acclaimed award and set a very high standard for the new generation all-electric car built on an entirely new platform, which we’ll see developed for other Kia, Hyundai, and Genesis models in the near future.

Launched late in 2021, I really liked the car when I had a first drive, then longer time with the car has reinforced my impressions and showed what a good all-rounder it is.

What’s more important for many is the fact it is not one model, take it or leave it, but a multimodel range with various trim grades and power outputs to choose from. There's also a choice between all-wheel and rear-wheel drive.

Depending on your charging source it can take as little as 18 minutes to power up from 10 to 80 percent on a 350kW point, 73 minutes at a 50kW station, or with a 16A domestic wallbox, about 7 hours and 20 minutes to full capacity.

Then, the range depends on how forcefully or gently you push it along, and the indicated combined range of 300 miles seemed optimistic when we charged it and got 260 miles on two occasions.

The on-board computer will select the best driving modes to eek out the electricity, or press pedal to metal and make it move like a sporting SUV with a good conventional engine.

It’s quick from rest with minimal delay and goes from 0 to 62mph in around 6.0 seconds, cruises easily along a motorway if you don’t mind watching the range rapidly decrease, and its top speed is well above 100mph where permitted. How far you’d go before needing to recharge at that speed is something we didn't discover.

The Kia EV6 is at its best on A-roads and B-roads when the car’s recuperation or regeneration system puts back some electricity and modestly extends the available range while going at no more than 60mph and most likely a maximum 50mph.

Over a mixture of motorway, main, and secondary roads, we had a projected range of about 260 miles and that's what many ICE models will achieve. However, the difference is that it cost us less to do it than internal combustion engined competitors.

You certainly don’t lose out in driving enjoyment, with good steering, powerful braking and a very compliant and comfortable suspension setting available. Our car had the slightly larger diameter 20-inch wheels and tyres, and they did tend to be noisy on bad surfaces and sometimes jarred the chassis, but generally it was a smooth system.

With grip front and back, the road holding was excellent. It turned in sharply and followed the predicted line through a corner without any drama.
Robin Roberts

Secondary controls were neatly laid out and quite simplified, and some may not like the amount crammed into the infotainment system’s massive 12-inch+ wide screen. It’s big, very clear, and comprehensive once you get used to it.

The Kia’s climate control was wide-ranging, precise, and efficient, and filled the cabin with air, aided by powered windows and a really big sunroof.

Oddments room is reasonably good, although compartments may be on the small side for some users, but there’s plenty of them and a multitude of USB are fitted throughout, reinforcing its family friendly design.

Access was very good, but rear headroom might be tight for taller users. The good-sized dual-floored boot space was easy to use, and an additional space lies under the front bonnet where you might expect the engine to poke up.

The seats in the front were particularly comfortable and supporting, slightly less locating in the rear, but it’s a 5-seater nevertheless. Our test car had heated/cooling front seats and two rear heated seats.

Visibility was clear all round with good big windows, effective large wipers and bright LED lights for an EV. You need the reversing sensors and camera however as the broad c-pillars hide some lines of sight.

We have covered the modest noise level, and it was the only real distraction in what was a very refined, sophisticated, and enjoyable driver’s car.

Sometimes you're aware of its over 2-tonnes weight, but the Kia EV6 designers and engineers have done a good job in using that to aid road holding and make it feel extremely well-built.

At that rate, it’s not only going to be Car of The Year but, with strong residual value, a model for the decade ahead. 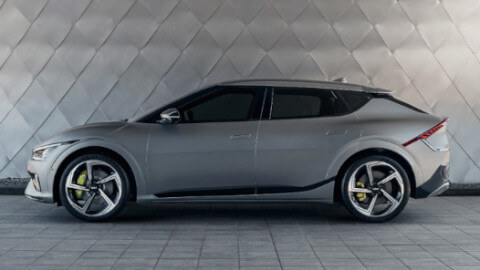