Discover how much countries around the world pay for their petrol

Here in the UK, petrol prices never seem to go down, do they? It's therefore commonplace that we have become accustomed to paying a considerable amount for our petrol. But have you ever wondered how much you would pay for petrol in other countries around the world?

Using data from globalpetrolprices.com we've compared just how much it would cost to fill your car from empty in another country. These include 'The Top 10 Cheapest Petrol Countries', along with some select countries for comparison, along with 'European Petrol Prices' too. Some results are properly surprising, so let's take a look at the findings... 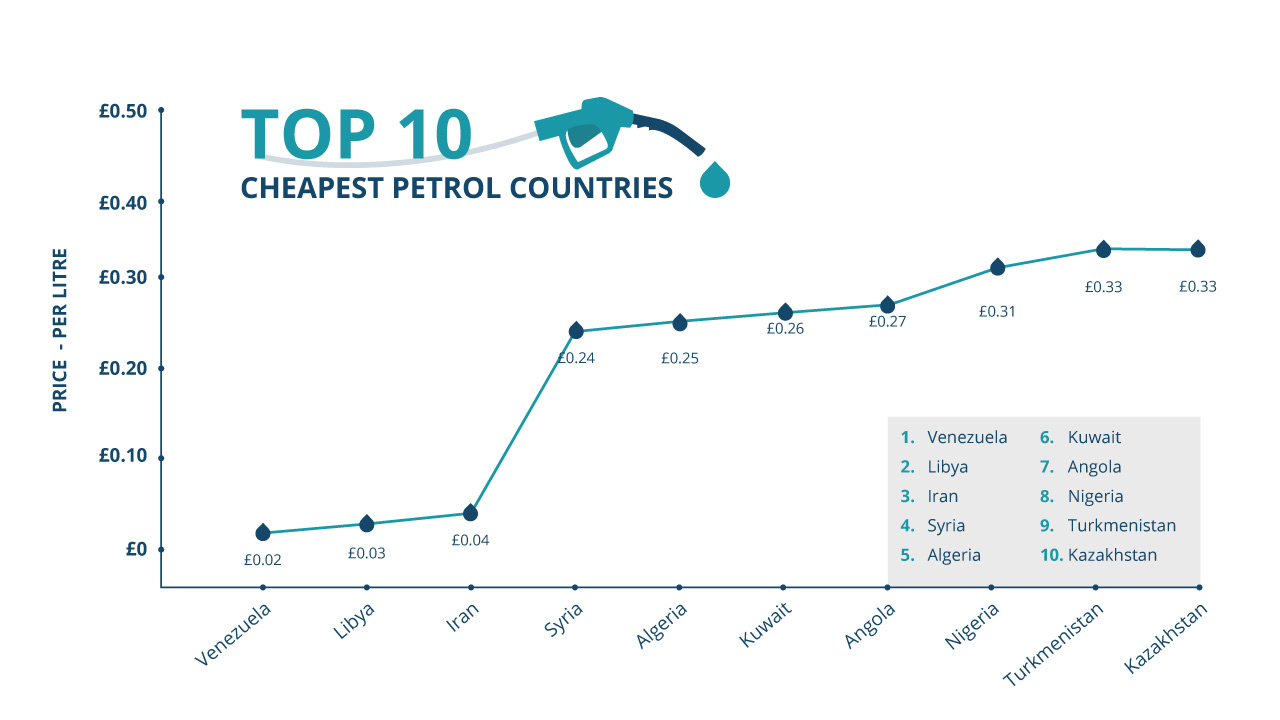 Here we see the Top 10 countries that pay the least amount of money for their petrol. Venezuela is the world's cheapest country to buy petrol, where amazingly it costs just 2 pence (GBP) a litre.

This is because it's home to some of the biggest oil reserves in the world. But it's also a country where income is very low too. You will also notice that oil-rich middle Eastern countries are amongst the cheapest places in the world to buy petrol. 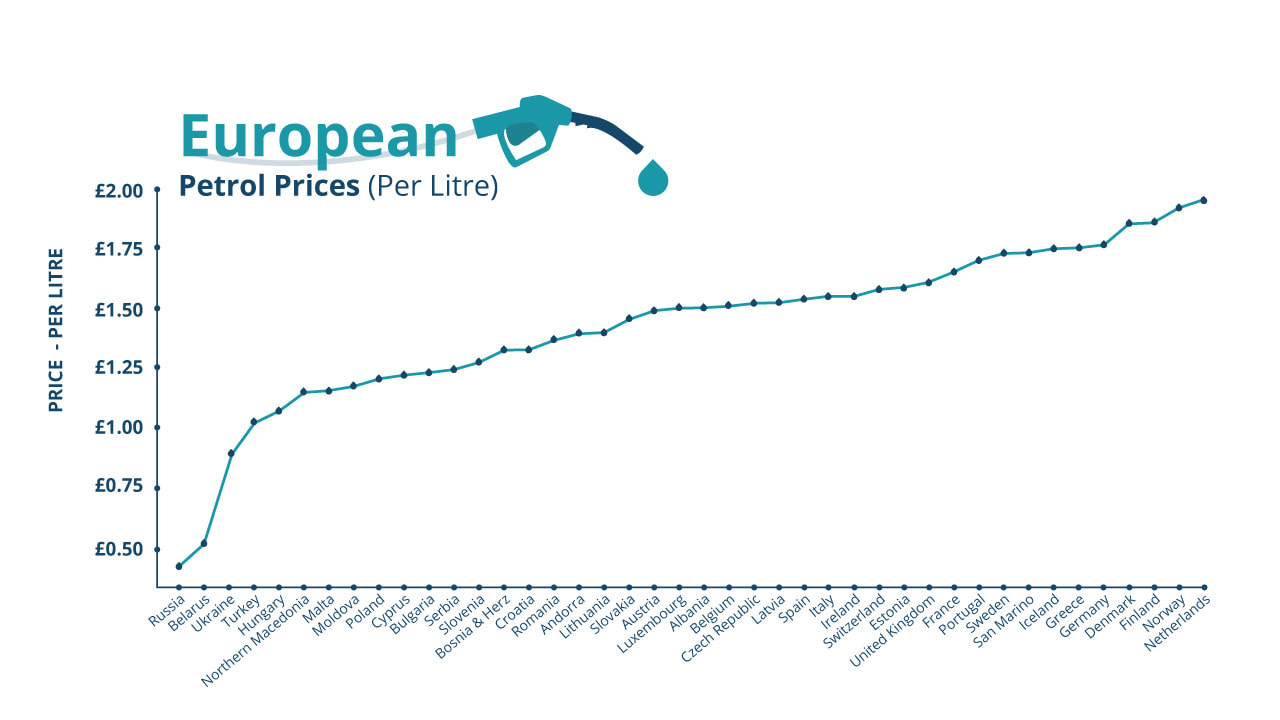 As a bonus, we have created an extra infographic using the data from globalpetrolprices.com to show the 42 European countries, and where they rank for the price of their petrol (per litre).

Despite our thoughts that we pay a lot for our petrol in the UK, we are not the most expensive. We actually sit in 31st position, meaning 11 other countries pay more than us for their petrol. These include countries such as Germany, Portugal, Finland, Denmark and the Netherlands.

The real question everyone wants to know is how much would it cost to fill up some of the UK's most popular or sought-after cars in some of the world's cheapest countries for petrol? We have also included a few of the most expensive countries to buy petrol in, as a comparison. Let's begin with the UK's best-selling car... 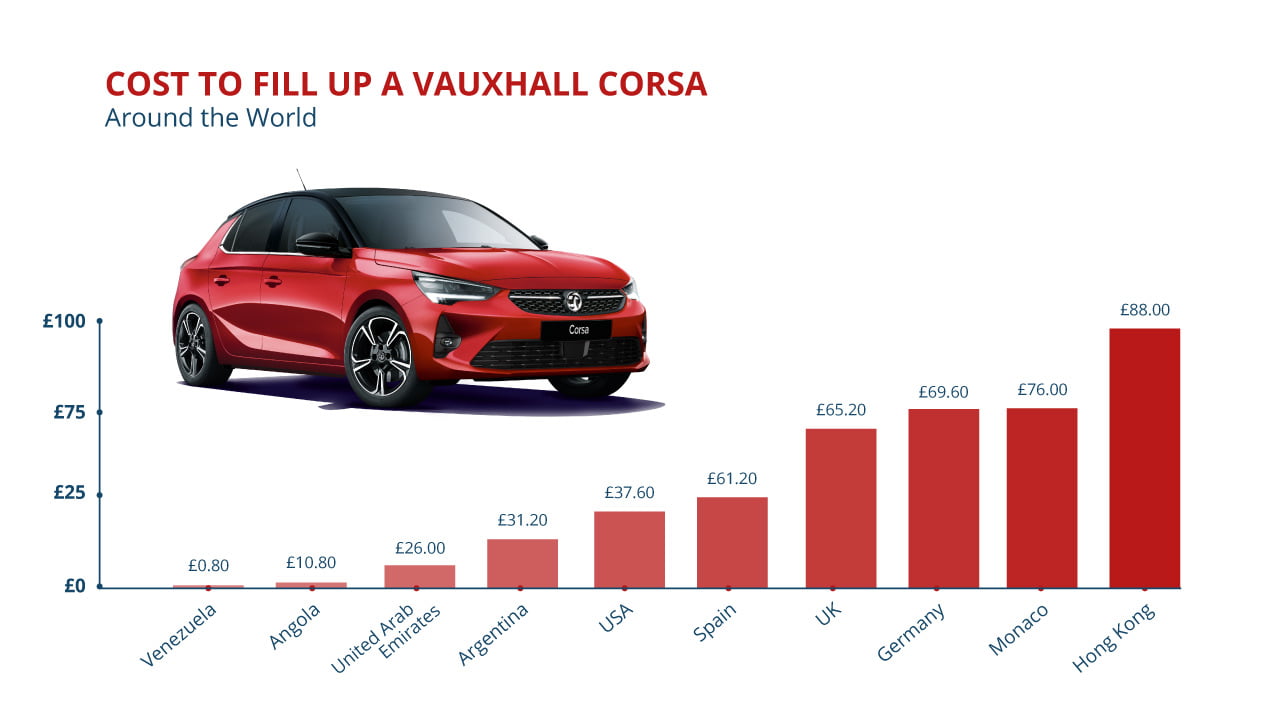 The Vauxhall Corsa is the UK's best-selling car, after stealing the crown from the Ford Fiesta. In the UK, from empty it would cost approximately £65.20 to fill its 40-litre tank. Meanwhile, in Venezuela it would only cost just 80p, and no, unbelievably that's not a typo.

Even if you went to somewhere like Argentina it would only cost £31.20 to fill up. However, if you filled your Fiesta up in Hong Kong, the most expensive country for petrol, it would cost you a staggering £88. 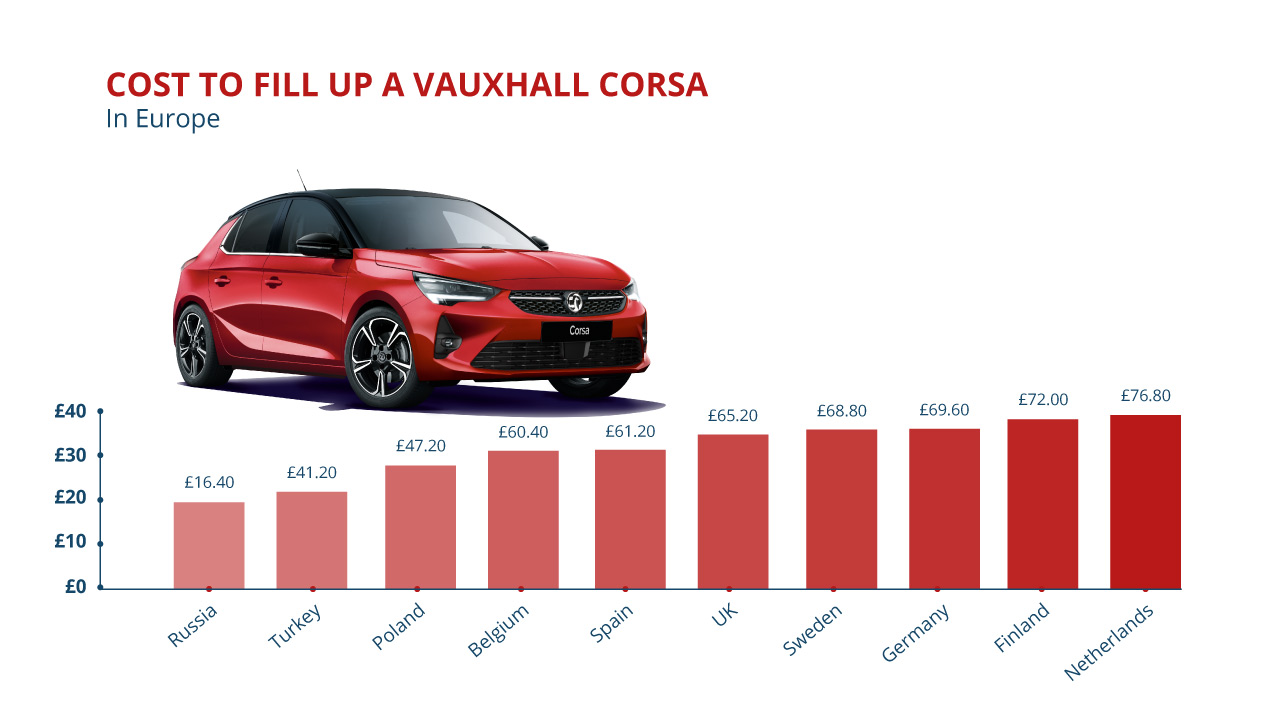 Interestingly, if we look at a random selection of ten European countries for petrol, it will cost just £16.40 to fill the tank of the Corsa in Russia, whilst filling up in Germany will still see you get just 40p change out of £70. 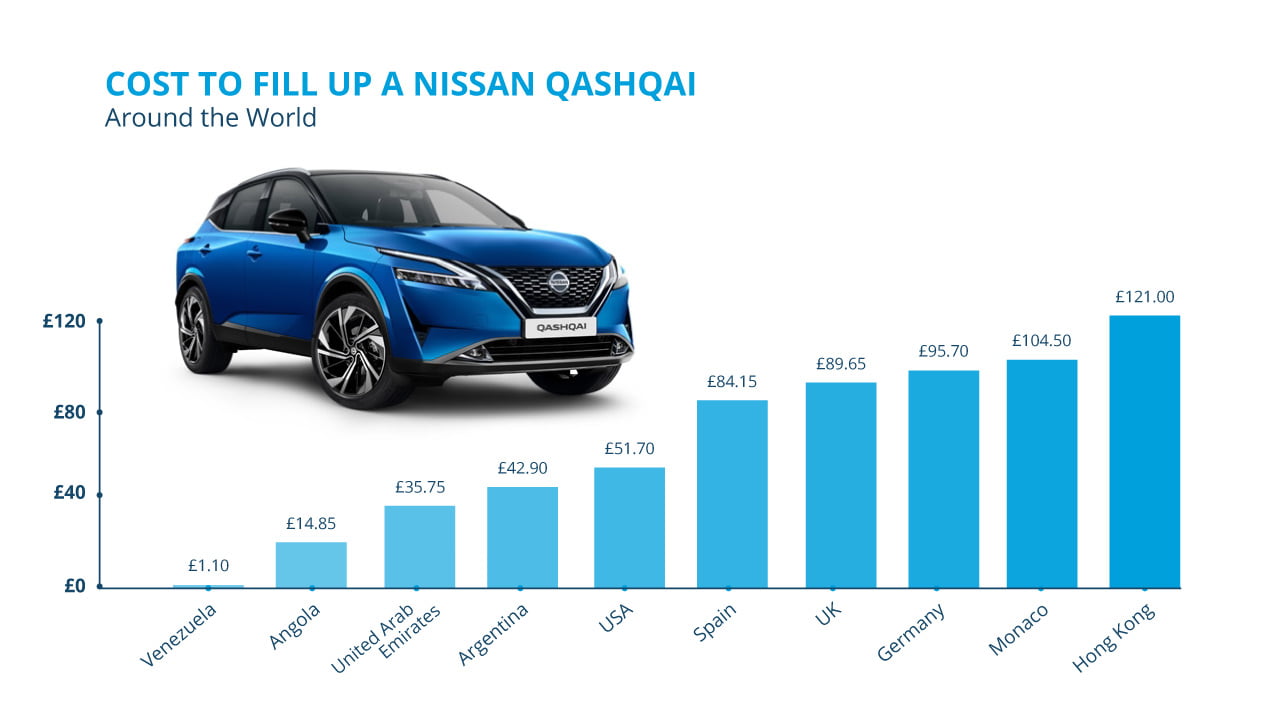 Here's another popular car in the UK - the Nissan Qashqai, which happens to be the most popoular SUV according to 2021 figures.

From the data we can see in Venezuela it would only cost £1.10 to fill this popular family SUV from empty. It's of course more expensive back here in the UK, getting just 35p change out of £90. Germany is similar, costing a hefty £95.70 to fill. However, drive a Nissan Qasqai in Hong Kong and it will cost an eye-watering £121. 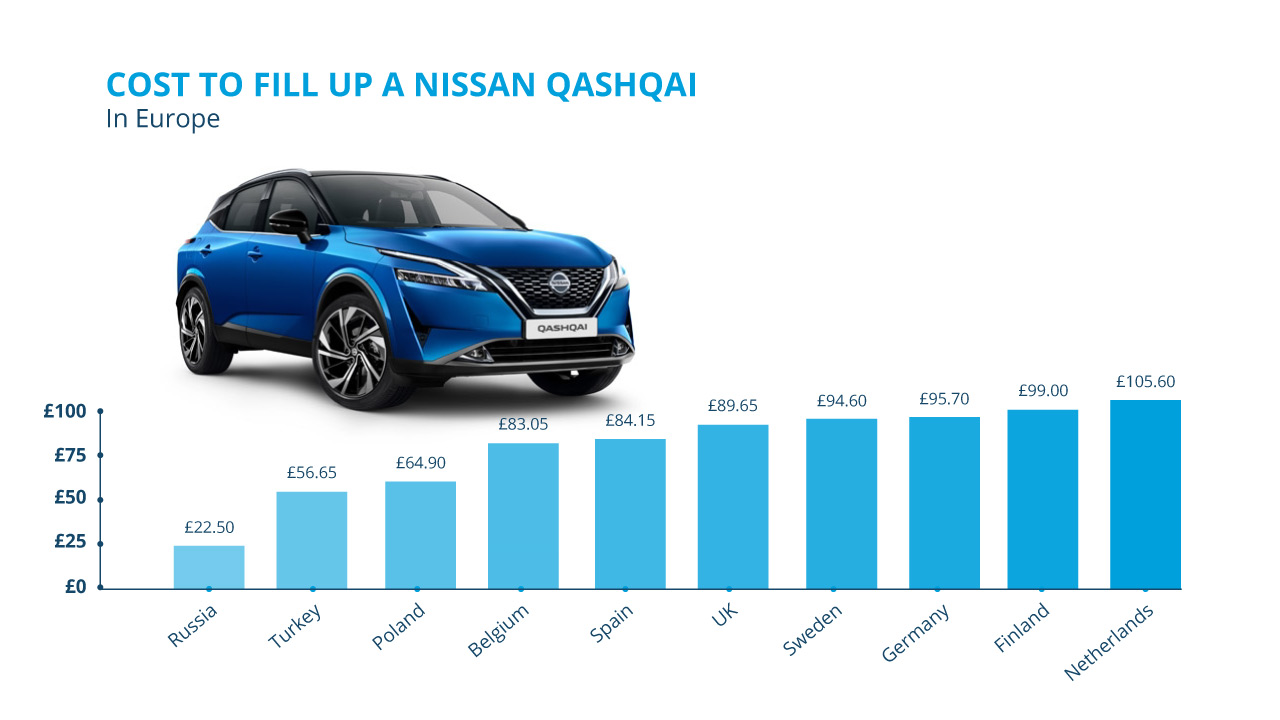 As for Europe, the most common cost is between £85 and just over £105 to fill this popular SUV. With the three exceptions of Russia, Turkey and Poland who would pay a considerable amount less to fill the Qashqai. 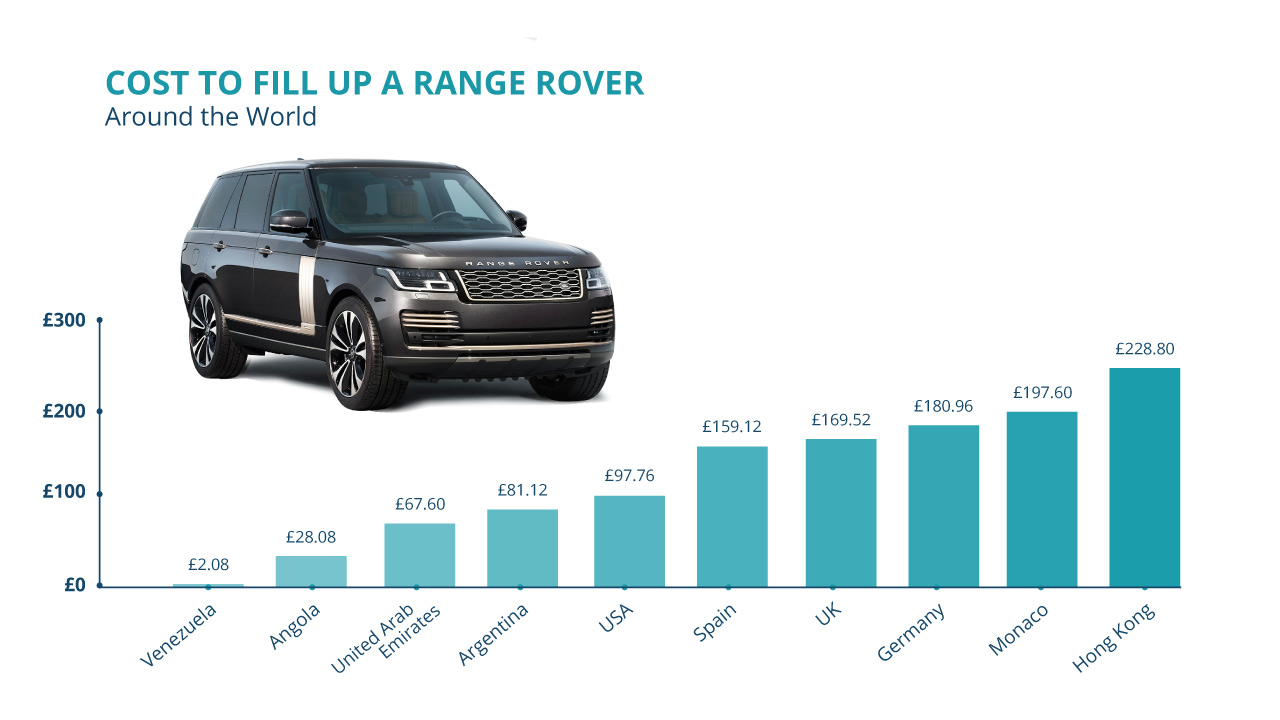 What about the iconic Range Rover? As these legendary off-road kings aren't exactly cheap to fill in the first place. In the UK to fill the 104-litre tank would cost just over of £171. Whereas in Venezuela you'd still be able to fill one up for just £2.10.

Or how about filling the Range Rover in the USA - where they love their trucks and SUVs. Not that long ago you could fill one for about £50, today its just shy of £100. If you had a Range Rover in Hong Kong however, it would cost a wallet-emptying £231 to fill. 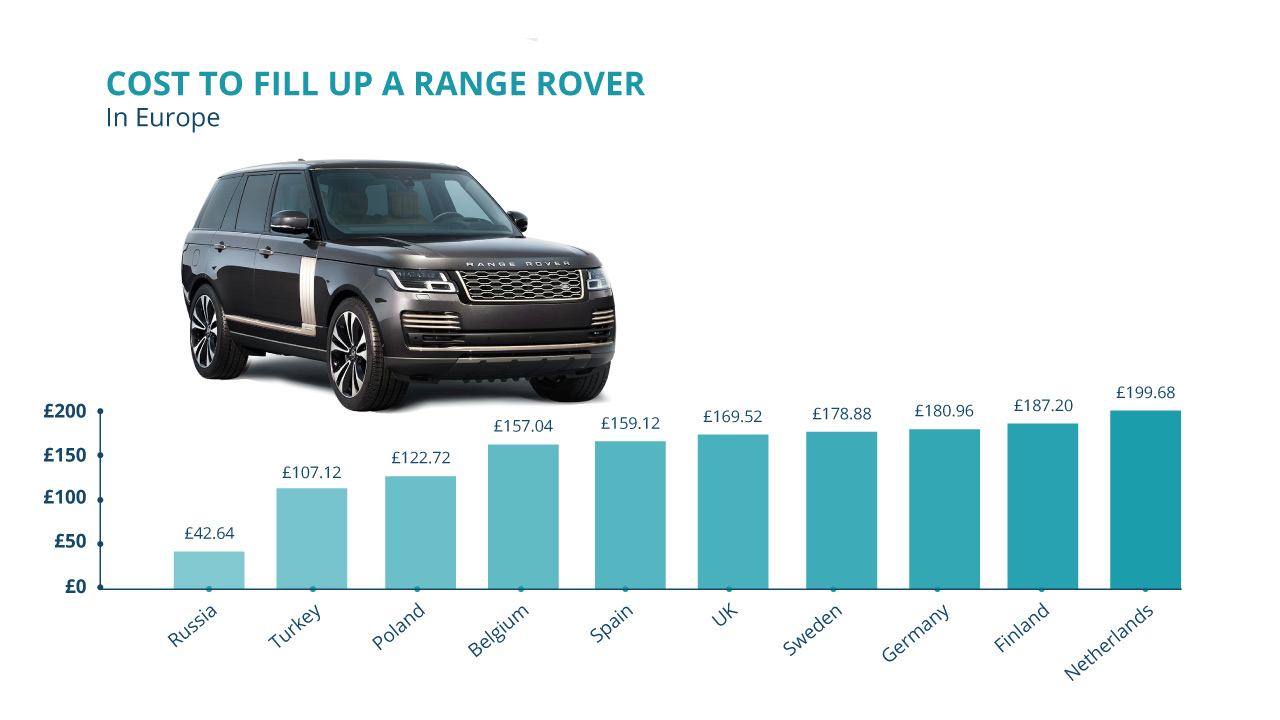 In some European countries, a Range Rover is like filling up a small supermini, with Russia seeing change out of £50, whilst those in the Netherlands will pay over three times as much. 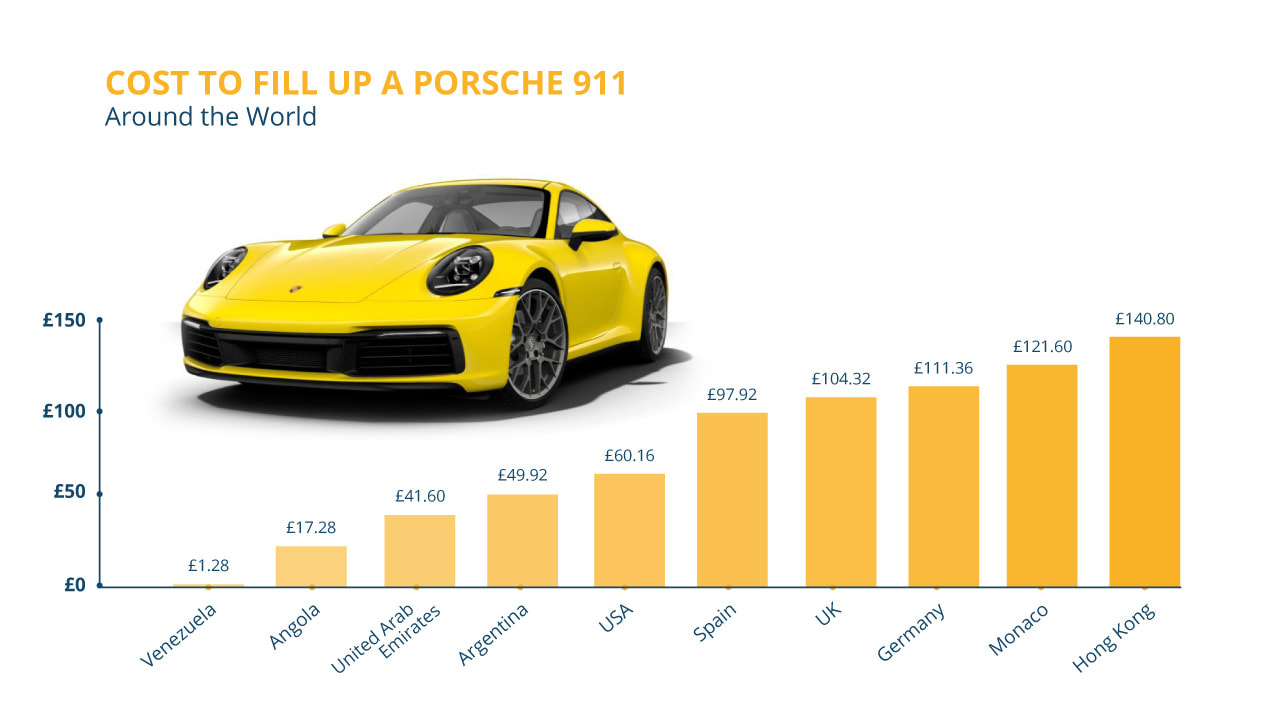 Finally, how about some exotic stuff? Such as the most iconic sports car of all time, in the form of the Porsche 911. Fill one up using regular unleaded (although a performance fuel would probably be best if we're honest) in the UK and it would cost £104.32 to fill its 64 litre tank.

Own a 911 in Venezuela and unbelievably it would only cost you less than £1.28 to fill up. 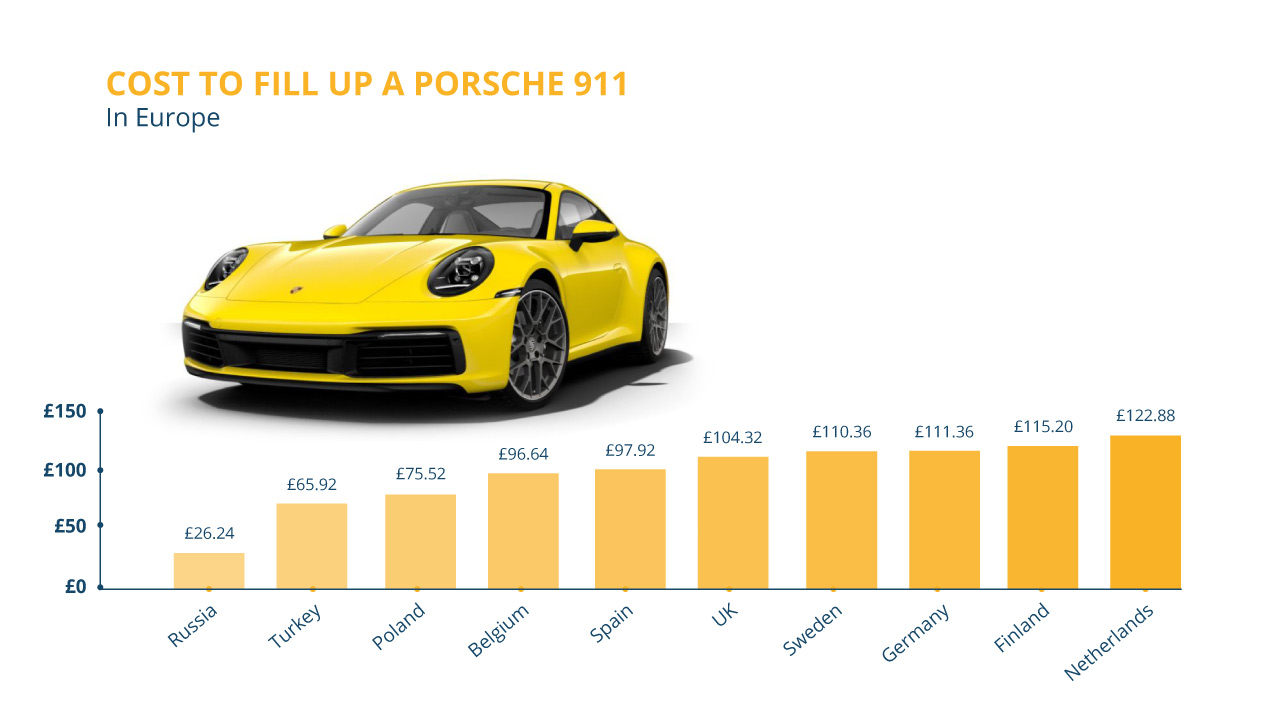 Take these cars elsewhere and you could be paying way less or way more depending on location. How about Turkey? Fill the Porsche and it's going to cost you £65.92 which isn't bad for a sports car icon, and even in the UK we'd be paying just under £105, which isn't bad considering the performance you get, but you'd be back at the petrol station in no time with such a special, yet thirsty car like this.

Find this article interesting? Perhaps you'd like to trim your fuel costs after reading this article? Why not click the article below regarding our pick of the 'Best Used Electric Cars' to start your electric car journey. Or if you'd prefer to search all of our used cars, or new cars, there is a link for those too.

Or perhaps you fancy a new or used Corsa, or how about a used Porsche 911? Discover your next new or used car with Evans Halshaw or with our partners Stratstone. 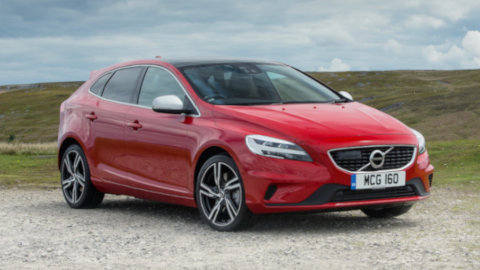