Analysis: How Much Does It Cost to Park at Major UK Airports? Looking at going away this year? We explore how much it costs to park at each of the UK's major airports. Discover our findings here.

As COVID-19 travel restrictions are lifted, plenty of Britons are setting their eyes on a well-deserved break around the globe.

Whilst staycations have become an increasingly popular form of holiday throughout the COVID-19 pandemic, there's arguably no better feeling than jetting away for a holiday in the sun.

The costs of going abroad can be significant, but did you know that the price of parking can sometimes be more expensive than the flights themselves?

With that in mind, we've compiled a list of parking prices across major airports around the UK to discover:

The most and least expensive airports for long stay parking 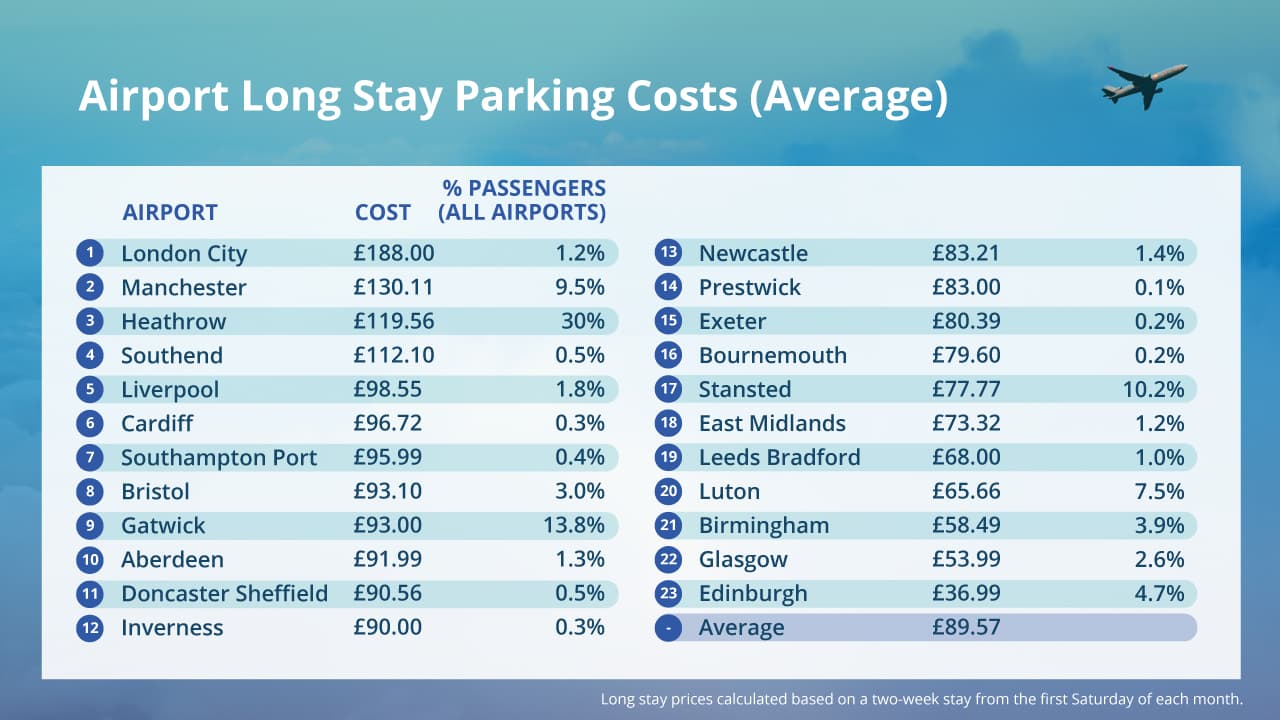 Those travelling from London City airport will face the highest parking prices for a two-week stay, paying an average of £188.00 - almost £60 more than the second most expensive; Manchester (£130.11).

Unsurprisingly, London airports make up three of the top five most expensive airports when it comes to long stay parking, with Heathrow and London Southend costing an average of £119.56 and £112.10 respectively.

You'll need to head north to Edinburgh if you want to save on long stay parking costs, with the Scottish airport offering prices of £36.99 for two weeks.

Luton airport's parking prices may also come as a bit of a surprise, considering it's the UK's fifth busiest airport according to CAA data. Long stay parking will cost you a reasonable £65.66, which is notably less than most London area airports.

The most and least expensive airports for short stay parking 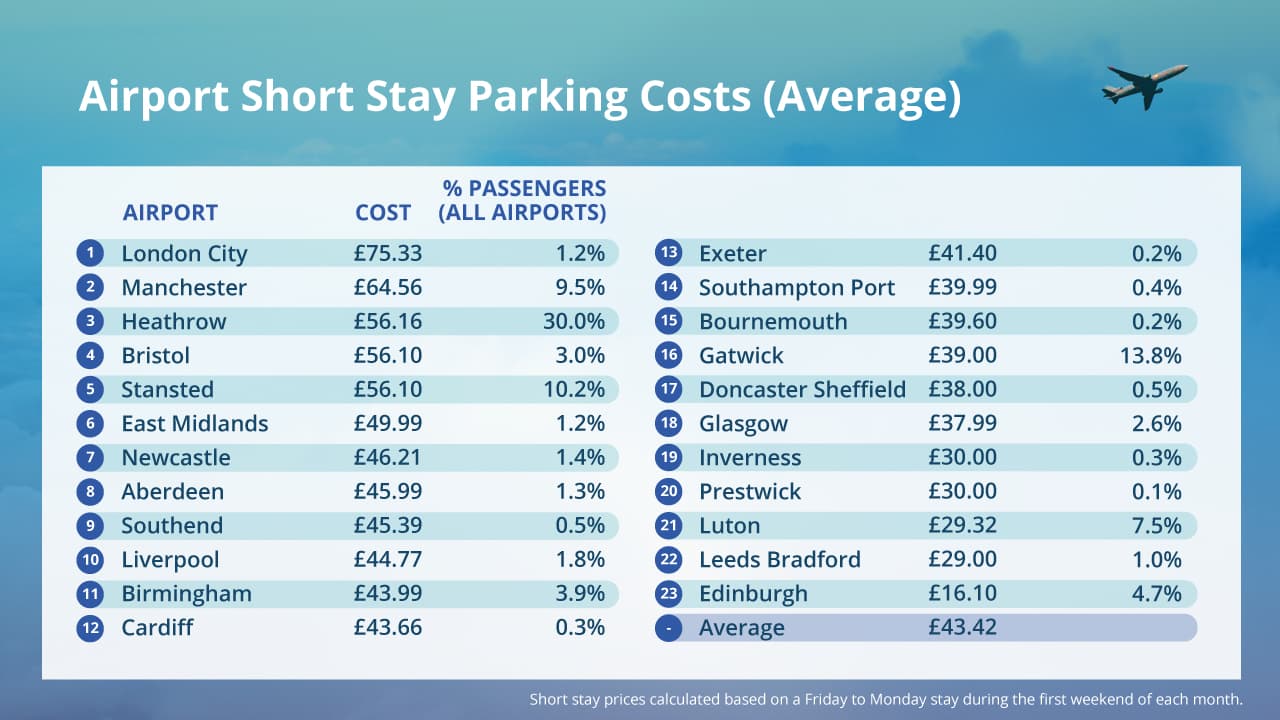 It's a similar story when it comes to the costs of short stay parking. Again, London airports make up three of the five most expensive, with London City charging the most at an average of £75.33 for a four-day getaway.

Manchester and Bristol are the most expensive airports for short stay parking outside of London, charging an average of £64.56 and £56.10 respectively.

Other Scottish airports such as Inverness, Prestwick and Glasgow are also on the cheaper side, but these airports only account for 3% of passengers at all airports combined.

The most and least expensive airports for drop-off parking 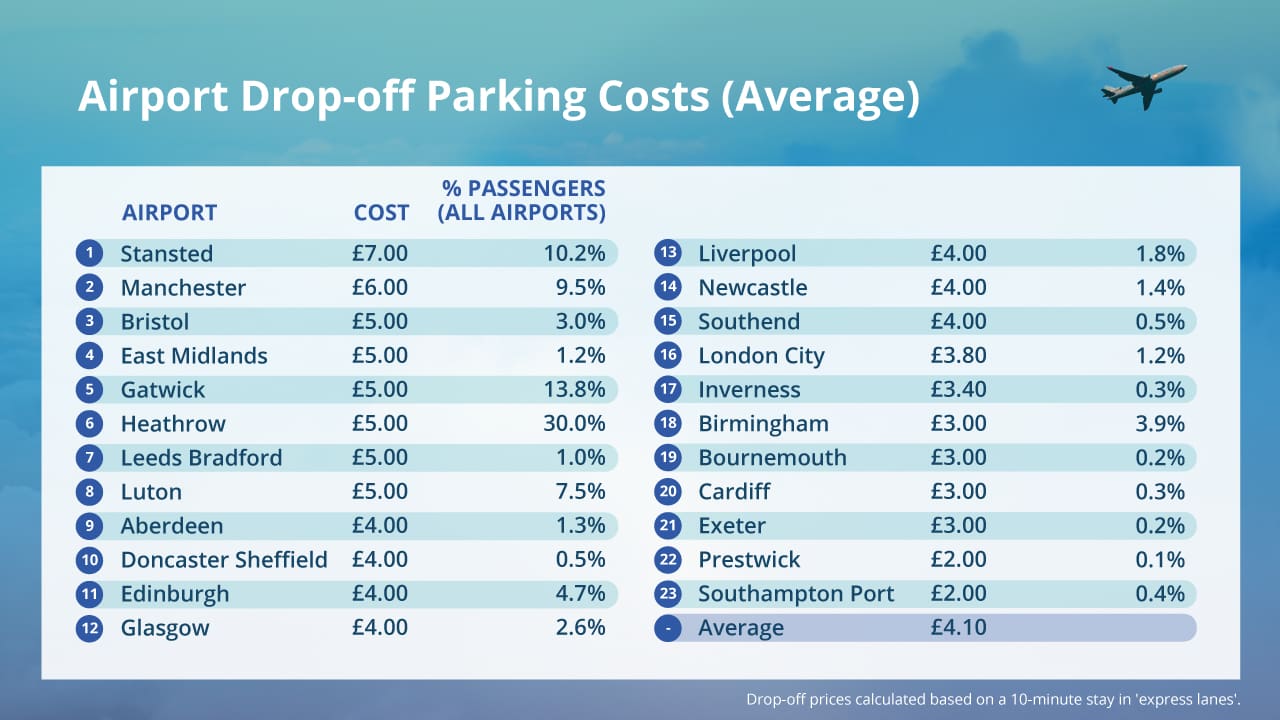 Not going on holiday yourself but have been drafted in by a family member or friend to drop them off at the airport? Hopefully it's not Stansted or Manchester where you'll be headed.

The London airport charges an eye-watering £7.00 for 10 minutes' worth of parking, with Manchester closely following at £6.00. Other major airports such as East Midlands, Heathrow and Gatwick North, aren't far behind, charging £5.00 for the same period of time.

On the other end of the scale, you have Prestwick and Southampton Port, each charging £2.00, closely followed by the likes of Bournemouth, Exeter and Birmingham who charge £3.00.

However, the two least expensive airports for drop-off parking only account for 0.5% of passengers at all airports, so chances are your friends or family won't be flying from these locations. 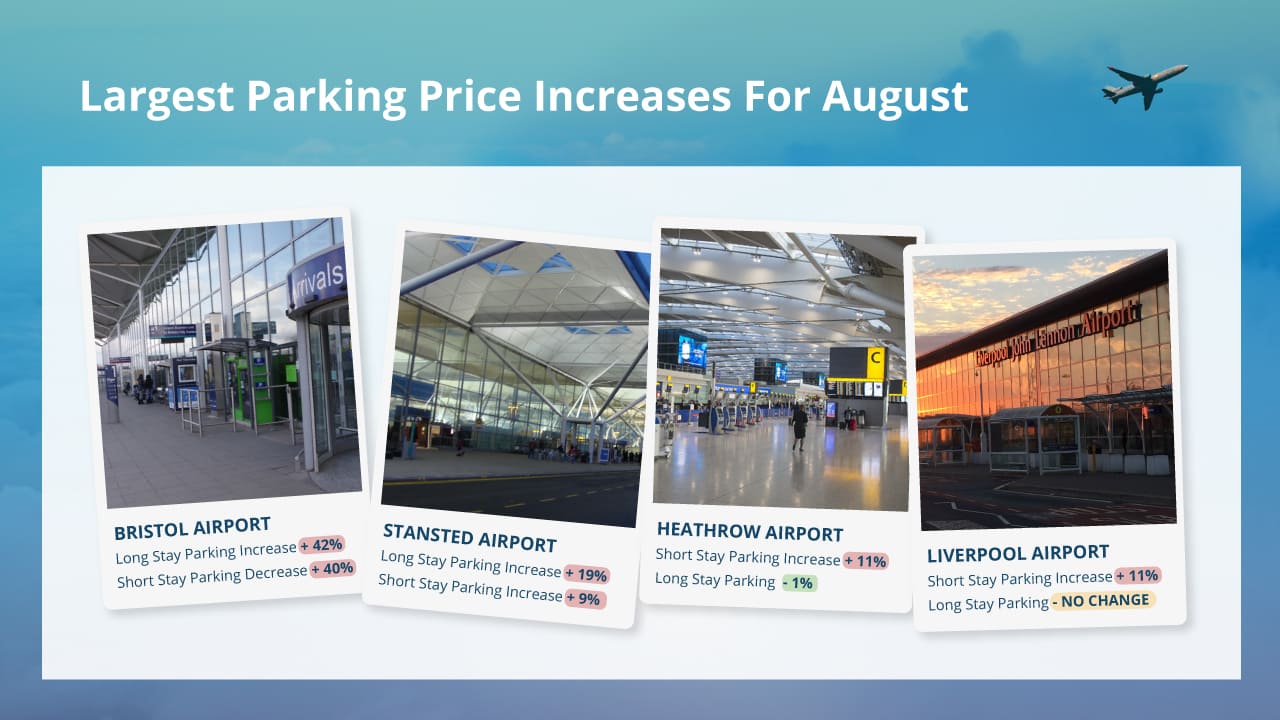 As we enter the summer months and the kids break up from school, the costs of holidays tend to increase, making it harder for you to getaway on that dream break with the family. By comparing the price of parking in August to that in June, we've been able to calculate which airports increase their prices by the largest margins.

Bristol has the largest price hike for both long and short stay parking, increasing its August prices by 42% and 40% respectively compared to June. Stansted also has an increase for both durations, rising by 19% (long stay) and 9% (short stay).

Heathrow and Liverpool airports increase their prices by 10% and 11% for short stay parking, making weekend getaways more costly. If you're planning on a two-week break from either of these airports, you'll be glad to know that prices remain the same for Heathrow and surprisingly decrease by 1% at Liverpool for long stay parking. Not all airports punish travellers for going away during the summer months though. By using the same June to August comparison as we did in the previous section, we've been able to calculate the airport which provides travellers with the largest decrease, and it's Southend who takes that title.

The London-situated airport reduces its prices by 9% for long stay parking and 7% for short stay, meaning you'll have a bit of extra cash to treat yourself to an excursion or meal out whilst enjoying your time away.

Cardiff and Bournemouth also decrease their prices for long stay parking by 2% each, but there's no change to the cost of short stay parking at either airport.

Airports with the largest increases for the month of December 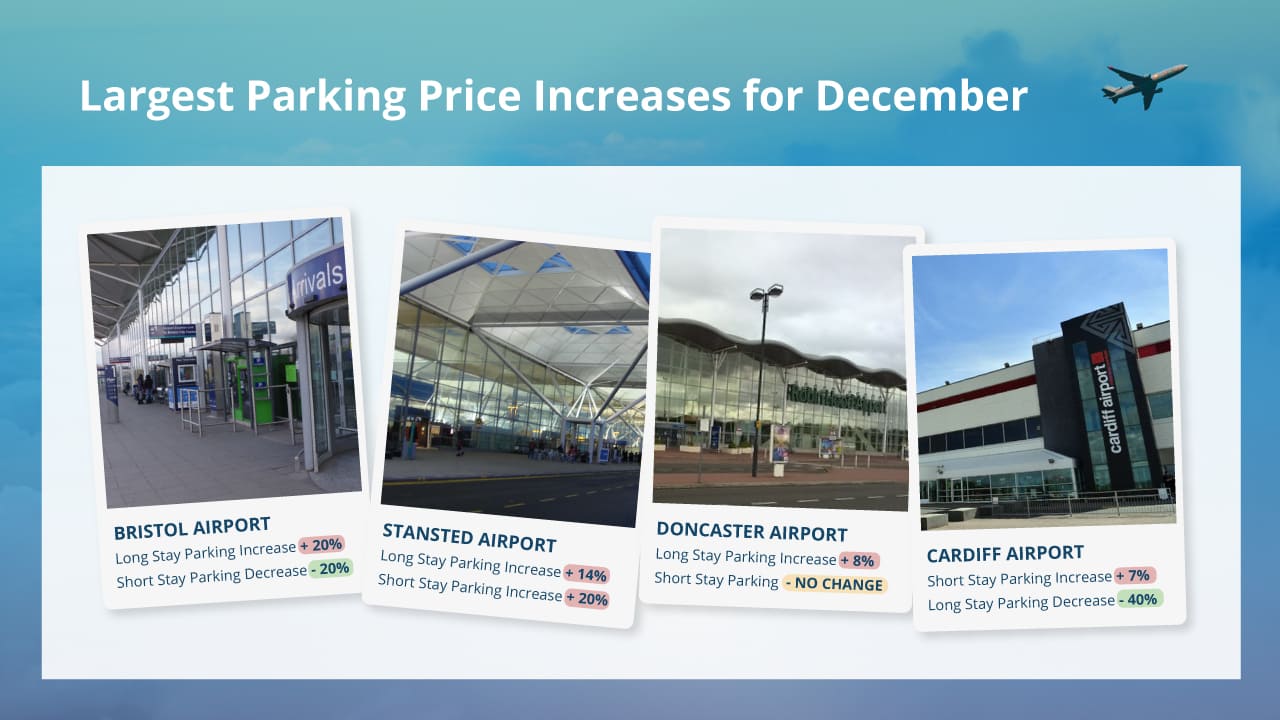 Another popular time of year for jetting away is on the run up to Christmas as many flee the freezing temperatures of the UK in search of the sun. We've compared the costs of parking for the month of December, to those in October, to see which airports implement the largest increases during December.

Bristol airport also significantly increases its long stay parking prices the most for the month of December, rising by 20%.

Other increases include Doncaster Sheffield by 8% for long stay parking and Cardiff by 7% for short stay.

Airports with the largest decreases for the month of December 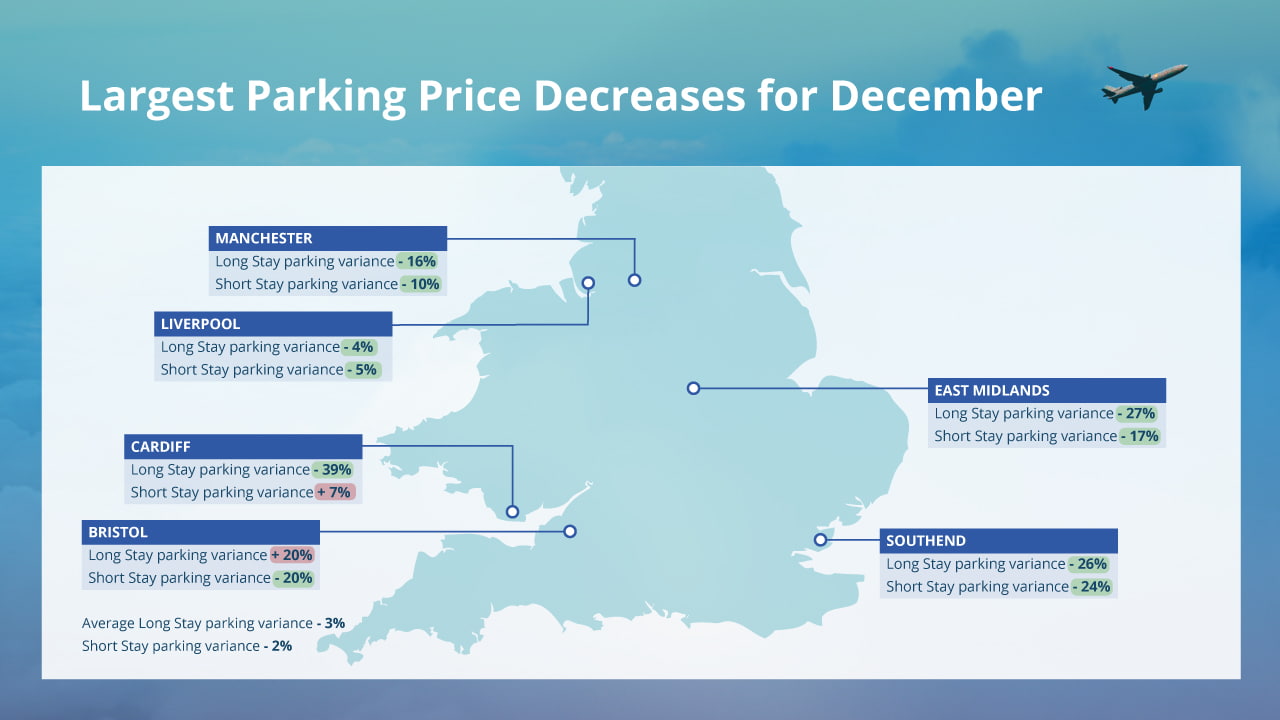 It's not all bad news if you're going to be travelling in December though as there are a number of airports that decrease their prices for both long and short stay parking compared to October:

Despite increasing prices by 20% for long stay parking, Bristol actually decreases prices for short stays by 20%. The same applies to Cardiff airport who increase the cost of short stay parking by 7% during December but decrease their long stay prices by a whopping 39%.

Most airports don't change their pricing structure too much for the month of December, but on average parking costs drop by 3% for long stay and 2% for short stay. All drop-off prices remain the same from October to December.

Are you getting away this year?

With thousands of flights taking off each month across the UK, there's plenty of opportunities to pack your bags and go and see the world. Thanks to the data above, you can calculate the costs of a holiday more accurately and avoid paying a small fortune to park your car at an airport.

If you'd like to read more, our blog and news sections are home to a variety of articles and guides such as the best cars for road trips and details for driving in countries such as Spain. 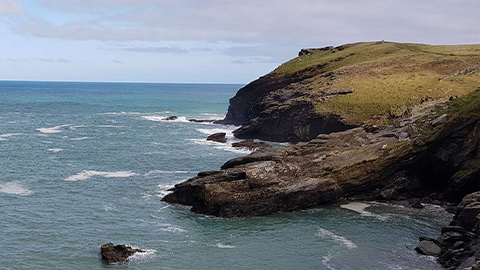 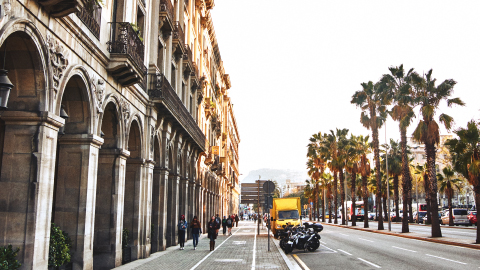