Reintroducing the Puma nameplate was always going to be a bold move by Ford, but the new Puma lives up to expectations in superb fashion.
View Offers

The Puma name is returning to the Ford fold, and its rebirth as a compact crossover has created nigh on the ideal family car.

Initially powered by a selection of petrol engines including Ford’s first mild hybrids, it's available now as an alternative to the likes of the Volkswagen T-Cross, Nissan Juke, and Renault Captur to name but a few.

Ford is late to the crossover scene – already it's had players in the compact SUV and MPV markets – and hopes the Puma will prove an instant hit.

It could well be right. The Puma was voted Car of the Year for 2020 in Britain’s most prestigious motoring awards, and my First Drive in the new model shows its huge potential.

Not only does it look the part, the seating is high, the styling sharp, and there's masses of boot space thanks to what Ford call its MegaBox system.

ST-Line models have more sporty looks inside and out, while Titanium versions feature the likes of massaging front seats and black protectors on the wheel arches.

A huge amount of work has gone into making the Puma super-practical, and not only is the boot compartment wide and clutter-free, there's also a huge space at the bottom of the luggage area complete with a plug-hole, so it can be washed out.

In total there's 456 litres of space available behind the rear seats, the luggage blind is soft and attached to the tailgate, so it won’t crush what you're carrying. It's also possible to carry a number of golf bags or the like vertically without issue.

The boot bottom is plastic covered to make it grime proof, and all the gubbins normally stowed there – such as a tyre repair and first aid kit – has been homed beneath the seats inside the car.

It gives the Puma class leading luggage space and with the rear seats folded there’s more than 1,200 litres of room to go at – enough to carry a boxed washing machine. Payload weight is more than half a tonne.

Compared to the Fiesta, on which the Puma is based, it is almost six inches longer, slightly wider and higher, and the boot space is up by 164 litres – that’s around four full-size suitcases.

The wheelbase is also significantly longer and while that has created more room in the back, the Puma’s coupé-like roofline can impinge on taller folk.

On the road, the Puma drives in impeccable fashion, and it's easily the pick of the small crossover bunch.

The mild hybrid models use a 1.0-litre EcoBoost 3-cylinder petrol engine mated to a 48-volt generator system to produce either 122bhp or a lively 153bhp – the most power ever to come from a 1.0-litre engine in any production Ford.

The hybrid set up not only assists the engine when it comes to performance aiding fuel economy, but there's also a healthy amount of torque in any of the six gears.

A drive mode set up gives settings for eco, sport, slippery, and trail driving as well as a normal configuration, and with sport selected the Puma is just that – sharp on the throttle and the steering.

There's little to pick between the two engines in terms of feel, but the 153bhp version is marginally quicker at 9.0 seconds 0 to 62mph compared to 9.8 seconds for the 122bhp, but there was a noticeable difference in economy.

While both have a cylinder cut off system to boost economy on a light throttle – a first for a 3-cylinder engine – we saw an average of 44mpg for the higher powered engine compared to 34mpg for the 123bhp over some demanding routes in southern Spain.

Officially they're rated at 52mpg for the 123bhp engine and 51mpg for the 153bhp at best under the new WLTP figures with emissions of 124g/km and 126g/km respectively.

Ford also offer the new Puma with a non-hybrid version of the 123bhp engine – which is slightly less economical – while a 7-speed DCT auto transmission is also available, as well as a 1.5-litre diesel.

Inside, the appearance is of a modern Ford, with a 12.5-inch configurable TFT instrument cluster and an 8-inch display screen standing prone in the centre of the dash with full smartphone compatibility.

There are only two USB ports – one on the centre console and the other inside the central armrest bin – but wireless phone charging is standard, and the car offers full Wi-Fi facilities.

Other technology available on the Puma – and another first for Ford models – is a cloud-based vehicle-to-vehicle system where information about potential hazards can be shared and flashed up on the displays.

And for those who want a luxury touch – and the cabin of the Pumas we tried was more functional than premium – Ford is planning to release a Vignale version later in the year with its trim embellished in high-grade leather.

The Puma is built in Romania alongside the EcoSport - Ford’s other offering in the compact sector – and while the Blue Oval brand may have been absent for this booming part of the car market, it heralds a new chapter for Fords of the future.

Its intuitive design ensures practicality is at a maximum, and being based on the underpinnings of the Fiesta, it's a car that's great fun to drive on a day-to-day basis. 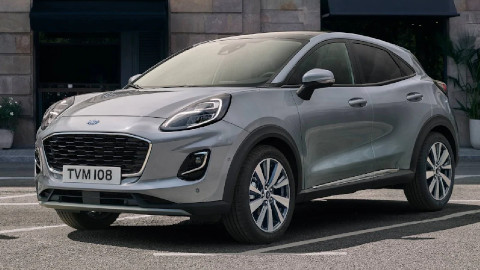 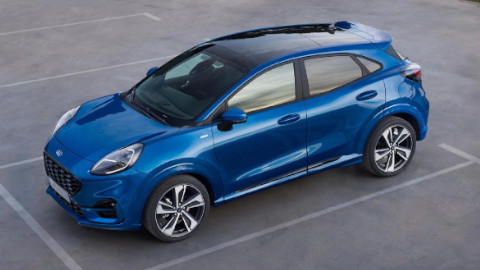