Which UK cities are most ready for electric vehicles?

The UK government recently announced that it would invest £620 million into electric vehicles (EVs) and its infrastructure, which forms part of a new Net Zero strategy.

This announcement follows the news from last year that the sale of new petrol and diesel powered cars would be banned from 2030, with the exception of some hybrids continuing to be sold until 2035.

At Evans Halshaw, we have used government data to establish which regions and cities in the UK are currently best prepared for electric vehicles. The data is based on passenger cars and light commercial vans only, it doesn't include large commercial vehicles.

The data highlights the number of public charging points there are currently, as well as how many EVs are registered in each town, city and region. 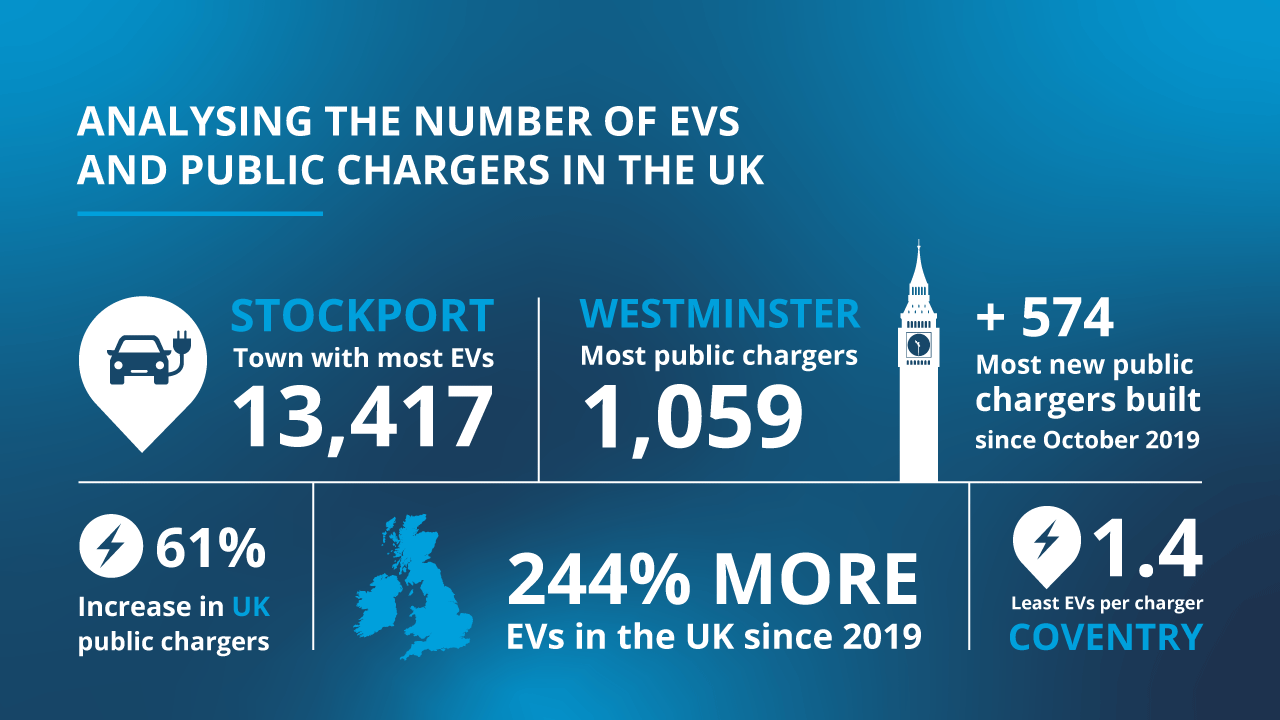 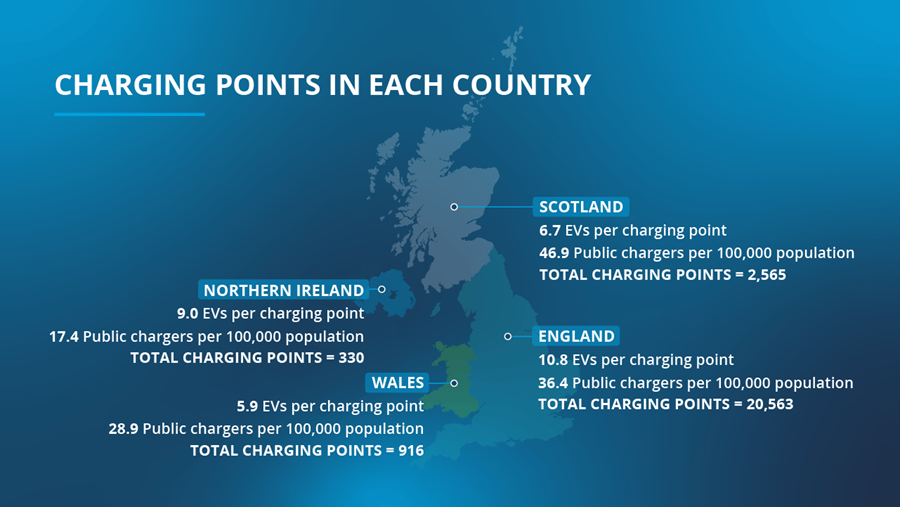 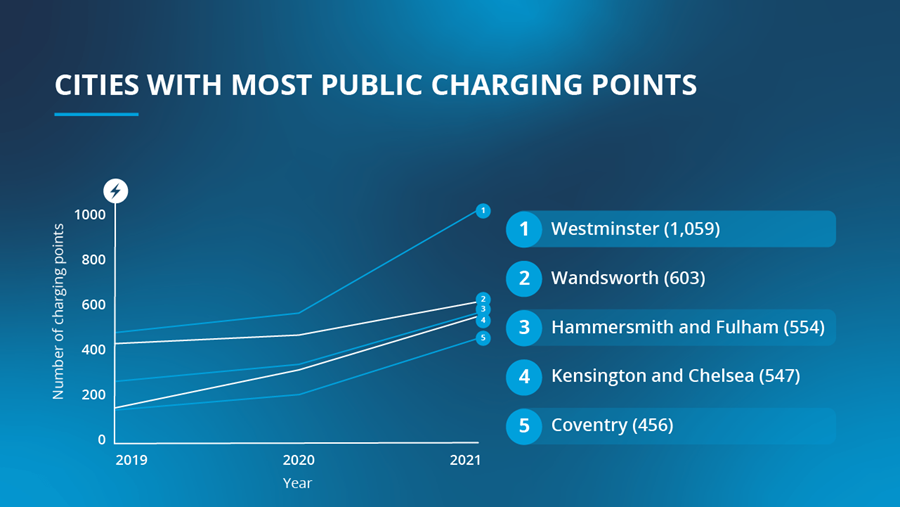 Cities with the least (and most) EVs per public charging point Through analysis, we've been able to determine which cities have the most and least EVs per public charging point.

Leading the way is Coventry, which currently has 655 registered EVs and a total of 456 charging points, which equates to 1.4 EVs per charging point.

The worst city in the UK is Stockport, which only has 35 charging points for 13,147 registered EVs.

Occupying the rest of the top five are Na h-Eileanan Siar, Waltham Forest, Brighton and Hove, and Lincoln, who all have between 1.6 and 1.8 EVs per charging point.

From the data, we can see which areas have improved their infrastructure the most since October 2019, and which have regressed.

Westminster is one of three London boroughs occupying the top five, with 574 new charging points having been installed there, which is the most in the country.

Outside of London, a hefty number of new chargers have been installed in Coventry and Brighton and Hove, helping them to cement their places as two of the most EV ready cities in the UK.

The likes of Salford and Manchester have less charging points than they did two years ago, with numbers having decreased by 15 and 12 chargers respectively.

Interestingly, four of the bottom five boroughs and towns reside within the Greater Manchester region.

Cities with the highest proportion of EVs 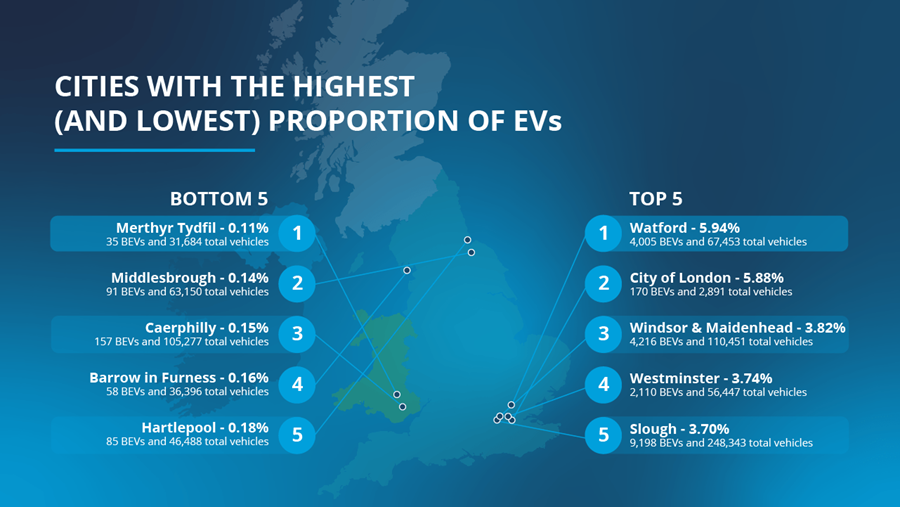 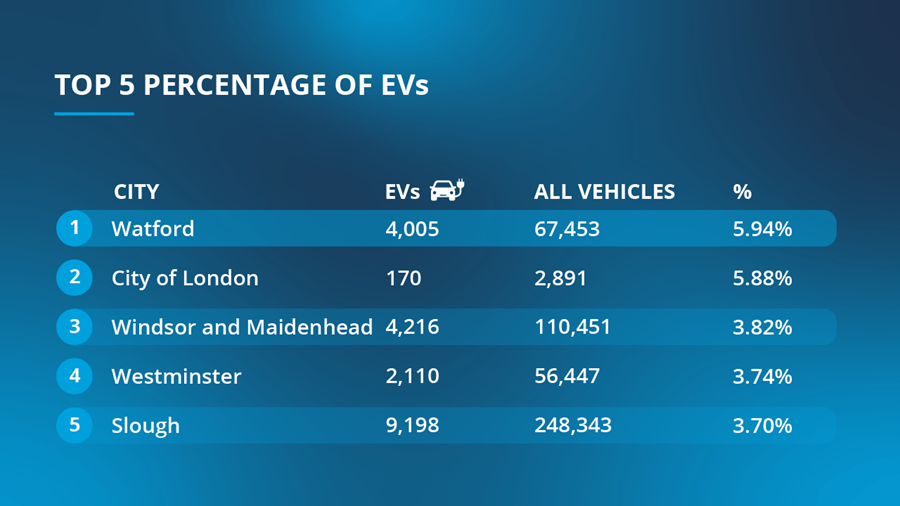 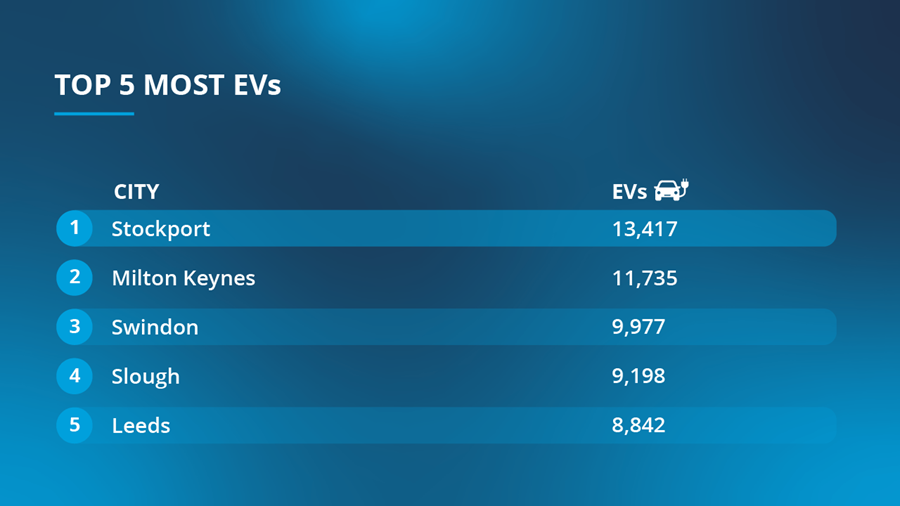 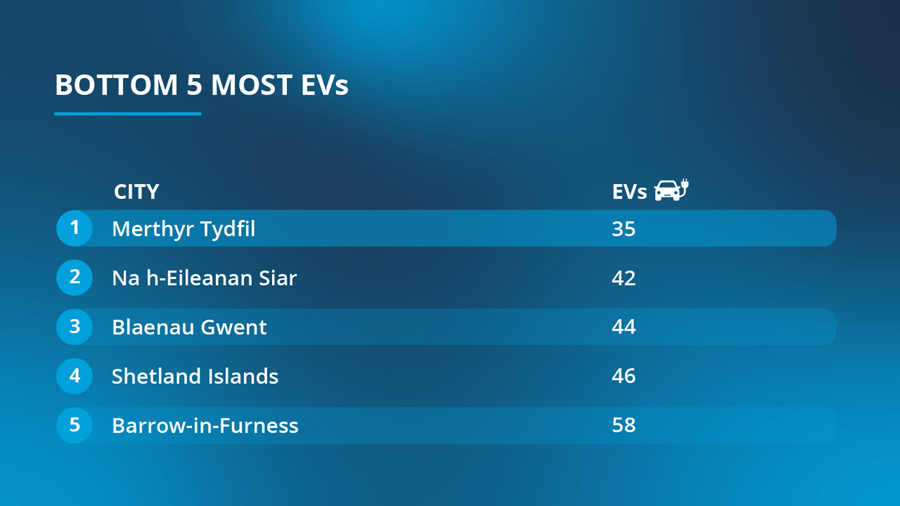 Not only does the data tell us which regions and cities have the most EVs and best infrastructure, we can also see what proportion of all registered vehicles in an area are all-electric.

Occupying the top spot is Watford with 4,005 EVs accounting for 5.94 percent of the 67,453 total vehicles that are registered there.

Three of London's boroughs (see table) reside within the top five. City of London, Windsor and Maidenhead, and Westminster's number of EVs account for between 3.74 and 5.88 percent of all vehicles in their areas.

Merthyr Tydfil is the lowest, with just 0.11% (35) of the 31,684 registered vehicles being all-electric. None of the cities within the bottom five have a EV proportion that's higher than 0.20%.

Cities with the most EVs

You'd have thought that the cities with the largest populations would have the most EVs. However, that isn't the case as our findings suggest.

Stockport, which has a population of circa 290,000 people, have 13,417 registered EVs; this is the largest in the country.

Despite having a population of circa eight million people, none of the boroughs within Greater London feature within the top five. That's more surprising when you consider how many new charging points have been built there in the past two years.

Na h-Eileanan Siar resides within the bottom five because there's 42 EVs registered there. Interestingly though, they have 27 public charging points available, which explains why they rank so highly for EVs for per charging point.

The regions best prepared for EVs 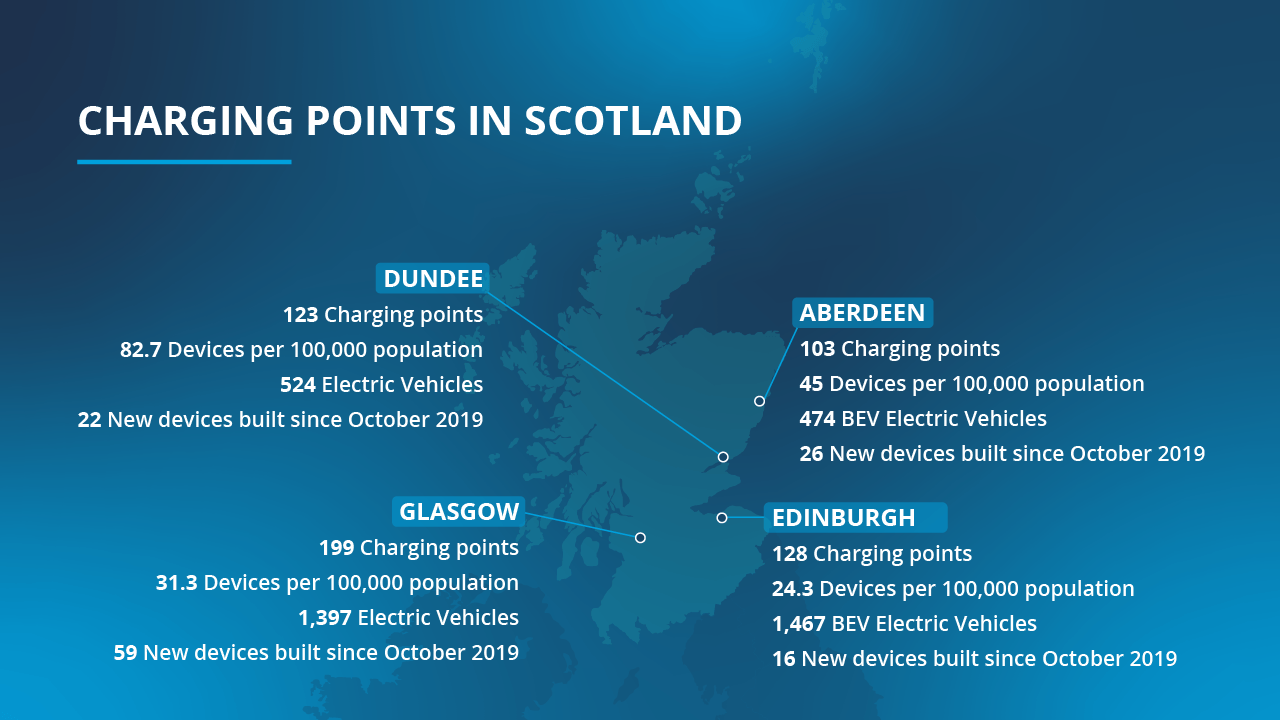 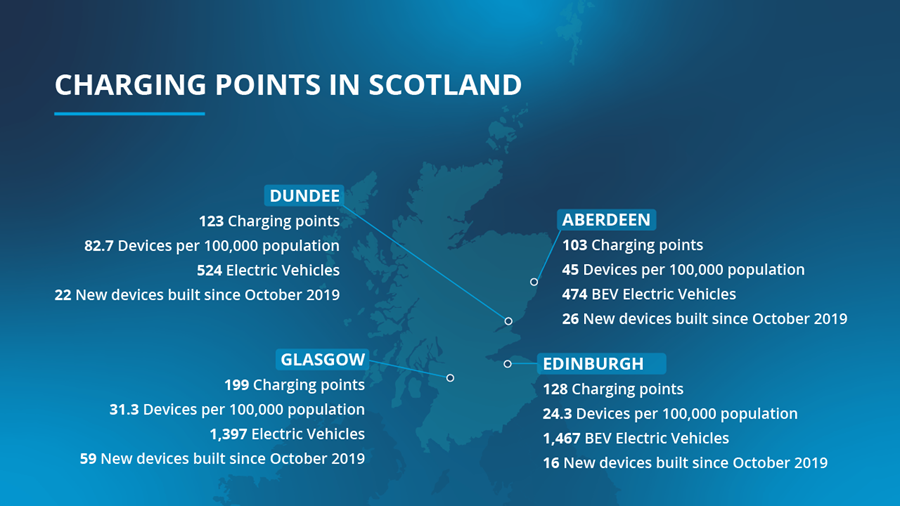 There are a grand total of 2,565 public chargers in Scotland, of which 657 offer rapid charging. The city with the most chargers is Glasgow, which has 199 for motorists to use.

Unsurprisingly, Glasgow and Edinburgh are the cities with the most EVs, with 1,467 in Edinburgh and 1,397 in Glasgow.

59 new public chargers have been built in Glasgow since October 2019, which is the highest for any city in Scotland. By contrast, there have been 16 new chargers installed in Edinburgh during the same period.

There are a total of 916 chargers in Wales, with 104 of them residing within the county of Pembrokeshire. Cardiff is the city with the most chargers, offering 78 for motorists to use.

Swansea is the city with the highest number of EVs (918), while Cardiff ranks second highest with 627 EVs. In Tyne and Wear there are 1,653 registered EVs, which is the most in the North East, whereas County Durham have the least with 764.

Newcastle upon Tyne have the most EVs with 482. However, Sunderland follows closely behind with 349 registered vehicles.

Tyne and Wear have also been the most proactive, with 48 new public charging points having been installed there since October 2019.

143 new charging points have been built in Lancashire during the last two years, which is the highest in the region. The city of Liverpool is leading the way with new devices, with 46 new points having been installed there during the same period.

Despite there being 13,417 EVs, Stockport have 383.3 cars for every charging point, which is the worst in the region and country.

Yorkshire and the Humber

Although Greater Manchester has the most EVs, Yorkshire and the Humber is a very close second because they have 17,030 EVs, which is only 10 less.

Ryedale only have 129 registered EVs, ranking it the second lowest in this region. However, they offer 48.5 charging points per 100,000 people living there, which is the highest. 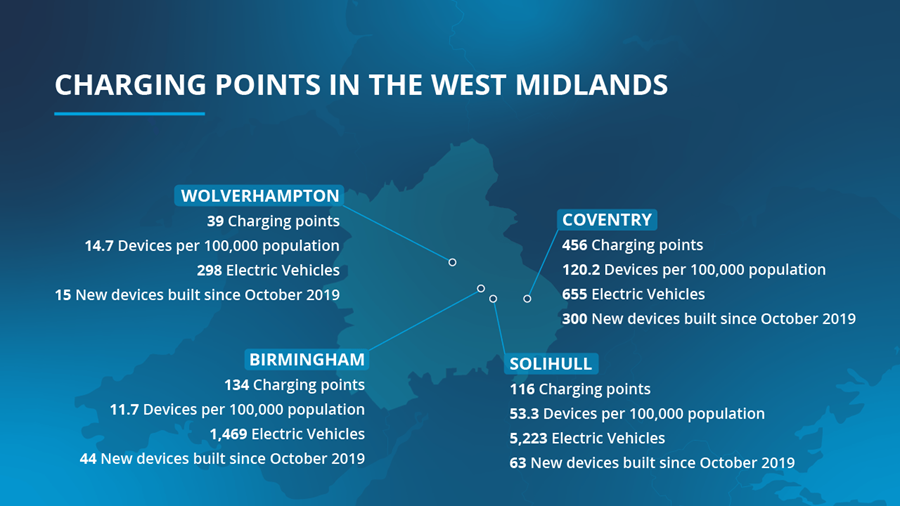 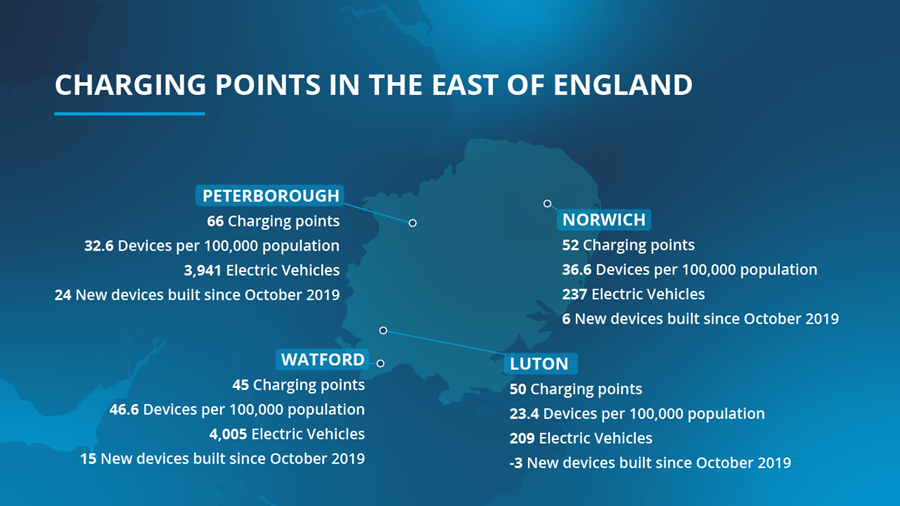 Despite this, the most new chargers (116) have been installed in Nottinghamshire since October 2019, although this isn't much higher than the 105 built in Derbyshire.

The City of Nottingham have more public charging points (148) than any other city in the East Midlands. For context, Leicester have the second highest number with 76.

Coventry comfortably has the highest total devices per 100,000 population (120.2). In addition, the most new devices have been built in Coventry (300). For context, the next best city/town is Solihull with 63.

Watford have 4,005 registered EVs, which is the most in this region. However, there are only a total of 45 public charging points located there.

The town with the most chargers is Bedford, which has 87 for motorists to use. This is despite having over 3,000 less EVs than Watford.

In addition, the most new public chargers (54) have been built in Bedford during the past two years, whereas Luton's total charging points has decreased by three. 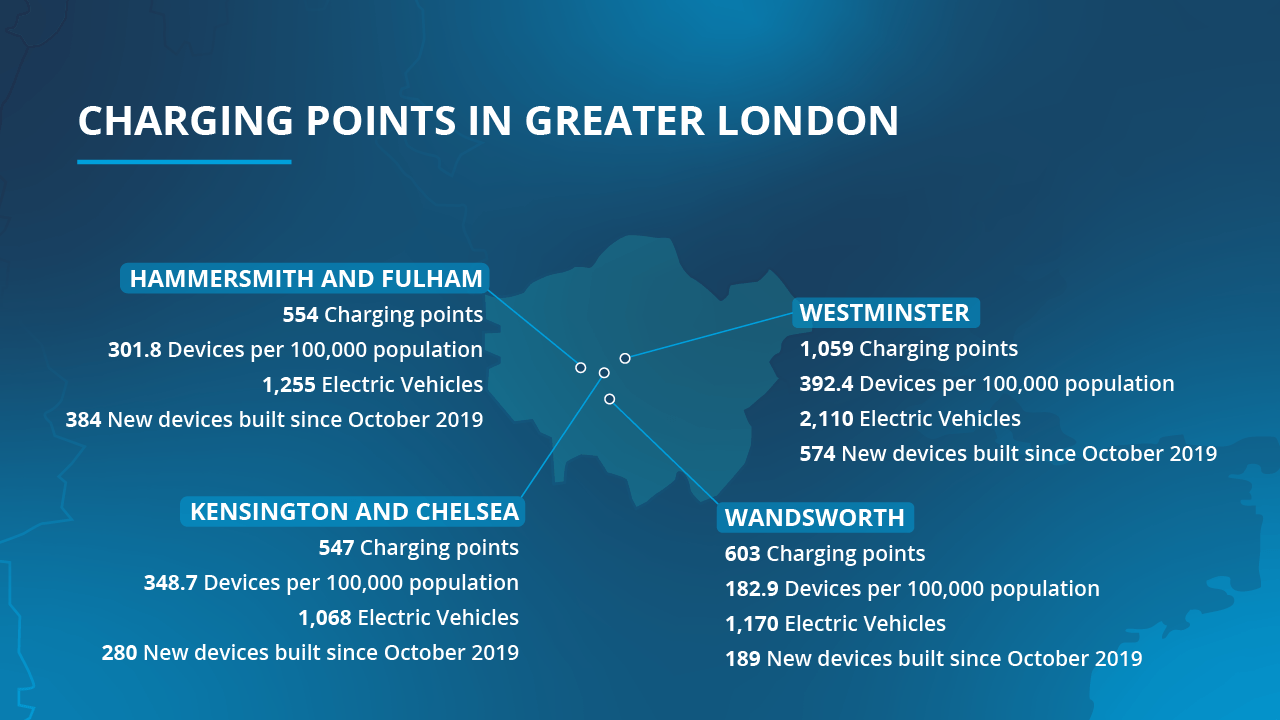 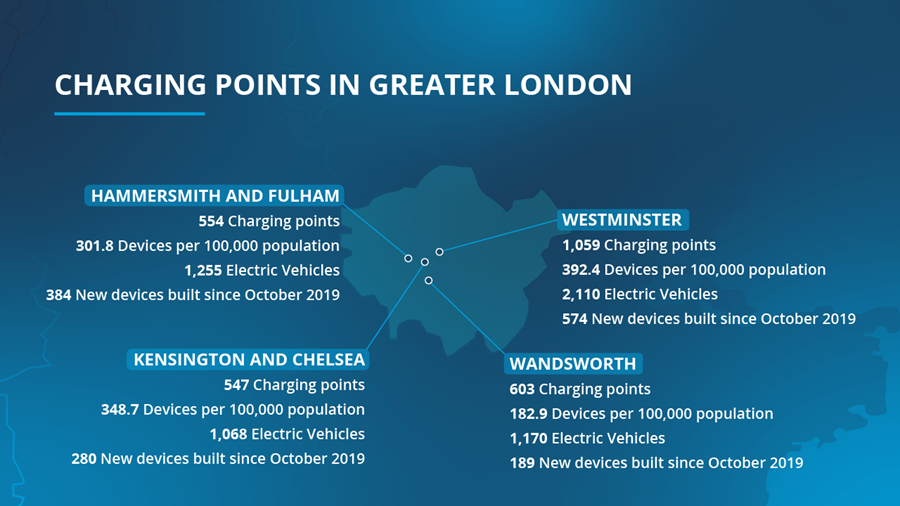 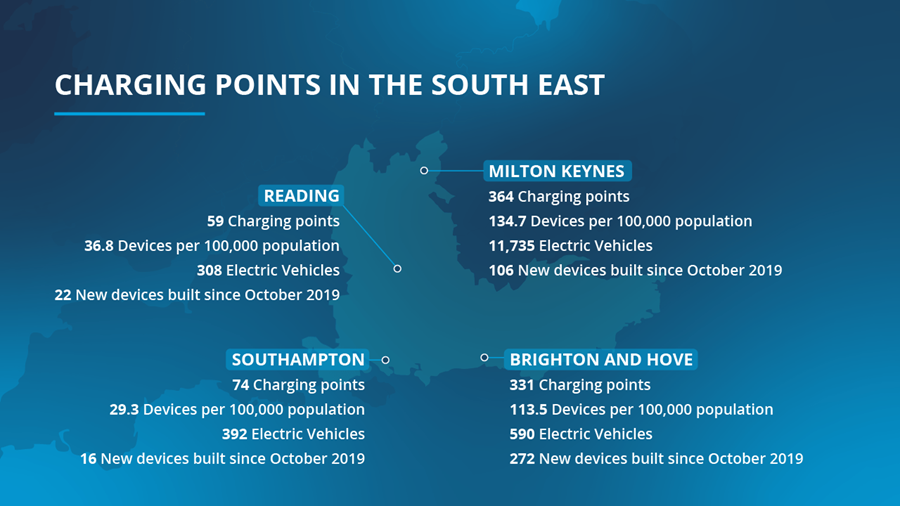 There are considerably less chargers in Hillingdon by comparison, with just 199 available. Despite this, there are 2,911 EVs in this borough, which is the most in this region.

In addition, only nine new chargers have been built in Hillingdon since October 2019, which is among the lowest in this region. By contrast, there have been 574 new chargers installed in Westminster during the same period.

In total, there are 56,756 EVs located in the South East of England. Interestingly, Milton Keynes accounts for 11,735 of those, which translates to 20 percent of all EVs.

There are 364 charging points for motorists to use in Milton Keynes, but this is only slightly more than Brighton and Hove (331), which has just 590 registered EVs.

Brighton and Hove have 1.8 EVs for every charging point; the best in this region. This isn't surprising given that 272 new devices have been installed there during the past two years.

Swindon have 9,977 EVs, which is the most in this region. However, there's only a total of 45 charging points located there, and that translates to 222 EVs per charger.

The data suggests that towns and cities in the South West haven't been the most proactive with the installation of new chargers. For example, just 33 charging points have been installed in Plymouth during the last two years, which is the highest in this region.

Although charging points have decreased by two since October 2019, there are still 117 other public chargers in Bristol, which is the highest in this region for a city.

Kim Costello, Chief Marketing Officer for Pendragon, which owns Evans Halshaw, commented: “Our study has helped to highlight how prepared some areas of the country are for the increasing number of electric vehicles that we're seeing every year.

"The data correlates with the number of enquiries we're getting on new and used electric vehicles, which is why we're ensuring our Associates are fully up-to-date on the models we sell so that they can provide customers with the best possible insight and advice.

"In addition, we're installing electric chargers at our dealerships throughout the country to ensure our customers have somewhere to recharge their vehicle." 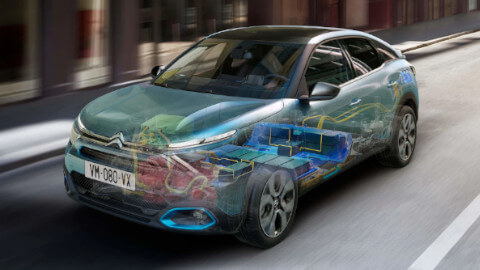