The Evolution of the Ford Mondeo

If there's any car that deserves to be called a 'great all-rounder', then it's the Ford Mondeo.

For nearly 30 years, this handsome family car has been a favourite among families and professionals because it legitimately ticks all the boxes. In fact, such was the significance of the Mondeo, that ex-Labour Party leader, Tony Blair, used it to define a new target voter in 1996: the Mondeo Man.

Sadly, Ford announced that it would be discontinuing the Mondeo in the UK from 2022. So, we thought we'd pay tribute to it by revisiting its journey through the decades.

The first Mondeo went on sale in the early '90s to replace the ageing Ford Sierra, which had been around for 11 years.

One of the most radical changes was the switch from rear-wheel drive to front-wheel drive. Some online articles state that the MK1 was in development for 6 years prior to launch, costing over £3 billion to produce. At the time, it was one of the most expensively developed cars ever made.

When it was launched, the MK1 Mondeo was available in CLX, GLX, Si and Ghia trim levels, with the latter coming with trademark "wood" trim on the centre console.

Optional extras were basically a list of everything we take for granted in modern cars, including air conditioning, side airbags, traction control, a trip computer and cruise control. The MK1 also featured a heated front windscreen called Quickclear, something that first appeared on the Ford Granada in 1985, and is still used today.

Both manual and automatic versions were available, the latter coming with an electronic switch that enabled the driver to choose either 'Economy' or 'Sport' mode; a novelty at the time.

The introduction of ABS on top of a driver's airbag as a standard feature quickly became replicated by competitor cars from across the family hatchback sector.

At the time, Ford were getting criticized by the motoring press because of the dodgy handling in a few of their models, such as the Escort and Orion. The Mondeo was different, however, with a sophisticated suspension design resulting in class-leading driving dynamics.

The first-generation Mondeo was facelifted in 1996, and although it shared most of the mechanical components of the pre-facelift version, it's widely referred to as the MK2, such was the difference in appearance.

It had redesigned bumpers, new headlight and tail light clusters, new wings and a new bonnet. No longer could the Mondeo's styling be labelled as bland, and the headlights performed much better overall.

It was the first Mondeo to feature satellite navigation, though it was a costly option, and it was simply a directional arrow on a monotone LCD screen.

Safety improved again in 1997, with the introduction of side impact beams, 3-point seatbelts, headrests and a larger driver's airbag enabling it to achieve a three-star Euro NCAP safety rating. The MK2 Mondeo was also named as one of the 'Top 10 Most Reliable Cars in Britain' in 1997, and in 1998 was the best-selling family car in Britain.

As well as safety improvements, 1997 saw the introduction of a performance focused ST24 model that was fitted with a 2.5-litre Duratec V6 petrol engine. It developed 170bhp and powered the car from 0 to 62mph in 8.0 seconds; quick for a family hatchback at the time.

Rated at 29mpg, it wasn't the most economical car in the world, but it was manageable if you had children and still wanted something with a bit more poke.

The MK1 and MK2 Mondeo saw varying levels of success in motorsport, and competed in the British Touring Car Championship from 1993 to 2000.

Some famous names took to the track in a Mondeo, including former F1 World Champion, Nigel Mansell, who famously crashed out at Donington Park in 1994.

Ford Team Mondeo had to wait until its final year of competition for its first and only triumph in the BTCC, winning the championship in a car driven by touring car legend Alain Menu. The team dominated the whole series, and completed a 1-2-3 with drivers Anthony Reid and Rickard Rydell coming in 2nd and 3rd place respectively.

The MK3 Mondeo was launched in 2000 after a discontinuation of the MK2, and was quickly recognised as one of the best cars in Britain by numerous publications.

It was a bigger, safer, and better-looking car than the previous Mondeo, which helped to reaffirm its place among the class leaders. The design of the interior was intended to be more like the cars produced by upmarket German brands such as Volkswagen and BMW.

In terms of engines, the 1.8-litre Duratec petrol engine was the most popular, and generated a decent 125bhp, which was more than acceptable in 2001. The other mainstream petrol engine was a 2.0-litre, producing 145bhp and still managing 0 to 62mph in under 10 seconds.

The diesels were much more competitive than the ones in the MK2, the pick of the bunch being the 2.0-litre 130bhp TDCi unit that reduced CO2 emissions greatly compared with the petrols.

LX models were the most popular, and came with cruise control, air conditioning, radio/CD player, power steering, multi-function trip computer and halogen headlights. Optional gadgets included heated rear seats, automatic headlamps and rain-sensing wipers, all of which were firsts for the Mondeo.

The performance version of the MK3 came in the form of the ST220. This model was fitted with a 3.0-litre V6 producing 226bhp, which propelled the Mondeo from 0 to 62mph in just 7.6 seconds and on to a top speed of 151mph.

It was good-looking too, with the bespoke ST body kit including a sports front grille, redesigned bumpers and twin stainless steel exhaust pipes. It was also treated to a full leather interior, 18-inch alloy wheels, 6-disc CD changer and Recaro seats in the front.

Ford also produced a performance diesel version of the Mondeo that came with a 155bhp 2.2-litre TDCi engine. It was designed to offer the speed and thrills of the ST220 but without the high running costs. It still managed 137mph and 0 to 62mph in 8.7 seconds, and was much better for people who covered lots of miles.

The MK4 Mondeo was around for seven years, and in that time it further cemented its place as a staple on British roads. Its launch was spectacular, with a fully-loaded version appearing at the beginning of the James Bond film, Casino Royale, driven by Daniel Craig.

The design and quality were again moved up a gear, and the Mondeo became a real rival to the likes of the BMW 3 Series and Mercedes-Benz C-Class. It was inspired by Ford's 'Kinetic' design principles on the outside, and the inside was kitted out with a plush, premium interior and a whole host of useful features.

The MK4 was the first Mondeo to achieve the full five-star Euro NCAP safety rating. It did this with the help of additional airbags, standard fit traction control and electronic stability programme (ESP). Other safety technologies included a blind spot warning system, lane departure warning and auto high beam.

The most popular engine choice was the 2.0-litre TDCi Duratorq 140bhp diesel. When fitted with this particular engine, the Mondeo could achieve 62.8mpg on the combined cycle while maintaining strong performance. A slightly quicker 163bhp version of this engine was also available, and if you really wanted serious performance then you could specify the 2.2-litre 200bhp diesel on the Titanium X Sport.

The fifth-generation Mondeo built on the success of its predecessor by adding more refinement and luxuries, making it a compelling purchase for private and business owners.

As you'd expect, a broad range of engines were available. However, it was the introduction of a hybrid option that sparked the most interest. It was possible for this unit to return up to 120mpg in the right conditions, which was notably higher than what the diesels could achieve.

Like previous generations, the MK5 was available as a hatchback, estate or saloon. Weirdly, the estate has a slightly smaller boot than the hatchback (525 vs 550 litres). Although, the shape of the estate was better suited to active families who needed to transport things like bicycles on a regular basis.

The MK5's interior took a notable step up in quality compared to previous models, with a large infotainment screen taking centre stage. A host of quality materials could be found on every surface, whilst equipment levels were generous as always.

Sadly, Ford announced they were going to stop selling new Mondeo models in the UK from 2022. There were a multitude of reasons for this, but ultimately it boiled down to the rise in the popularity of SUVs, which resulted in dwindling sales.

Although it's understandable from Ford's position, it's difficult not to feel saddened by the loss of an automotive hero, which has been a mainstay among families for nigh-on 30 years. However, we're confident that its name will be remembered fondly by numerous generations for the foreseeable future.

If you're looking to buy a Ford Mondeo, then you'll be glad to know that Evans Halshaw have a variety of quality used examples for sale. 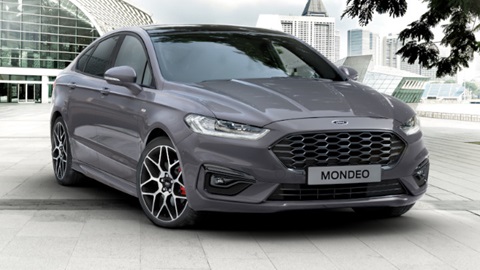