Yes it's that time again where we bring you your weekly dose of Rewind! This time we journey back to 1994 where a versatile American steals the show. However as you'll know by now, we kick-off by recapping some of the news from the year.

Transport to Europe became a lot easier as the Channel Tunnel was officially opened, and everyday people now had the chance to become millionaires thanks to the launch of the National Lottery. It was a great year for children's TV as the amazing 'Incredible Games' was first shown on the BBC. If you can't remember this show you're either not as old as me, or not as cool! Funnily enough it was the launch pad for Little Britain star David Walliams who hosted this children's classic. Elsewhere on the box, Tony Robinson became a household name with history fans as he hosted the archaeological discovery show Time Team, a show that's still going strong today!

The cheesy song of the year award was a close fought contest between two incredibly popular songs, Wet Wet Wet's 'Love Is All Around' and East 17's Christmas favourite 'Stay Another Day'. Also that year saw a massive Brit-Pop battle begin. Blur released their third album, 'Parklife' but were eclipsed a few months later by a 'small' Manchester band by the name of Oasis who launched their first album, 'Definitely Maybe'.

We'll finish our recap with two big sports stories from the year. Pete Sampras clinched the second of his 7 Wimbledon titles, and Brazil were victorious in the FIFA world cup defeating Italy on penalties. However, USA '94 will always be remembered for another penalty, the one taken by Diana Ross during the opening ceremony. With the goal frame comically splitting in half once it was taken, all the singer had t do for the gag to work was hit the target...She didn't!

Right then, Ford Mondeo is it?

The European Car of the Year award was a close run contest in 1994 which was eventually won by the Ford Mondeo finishing ahead of the Citroen Xantia. The Mondeo was designed to be the replacement for the Sierra and showed massive improvements compared to its predecessor. Better handling, aero dynamics and power to weight ratio, and a more modern design all contributed to the car's high score.

Available in a hatchback, a saloon or an estate, its popularity was evident in Europe. Coined as the 'World Car' the Mondeo was aimed at various markets across the globe which indicated its mass appeal. Its popularity is still strong today as manufacturing continues. The Ford Mondeo really is a modern day great when it comes to the automotive industry and fully deserved to win the European Car of the Year in 1994. 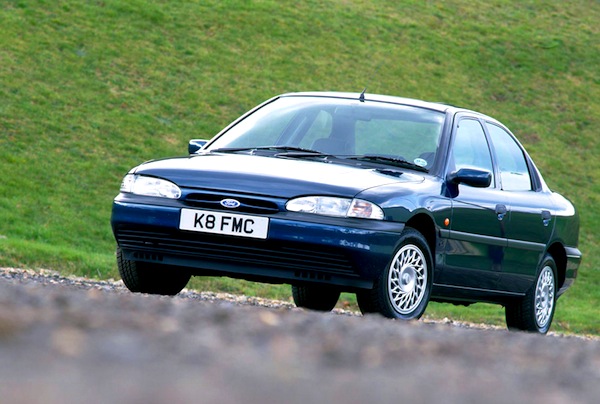